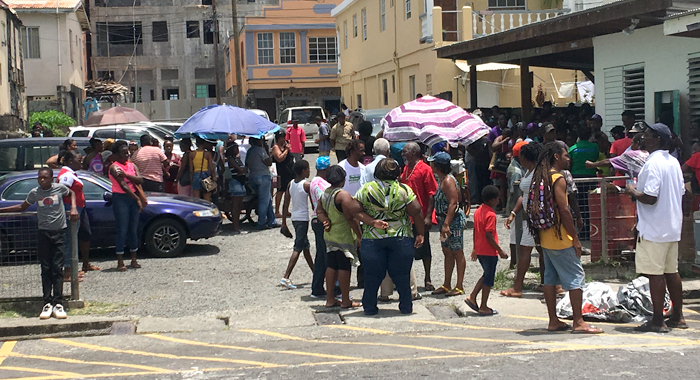 Persons who worked on the road cleaning programme wait to be paid in Kingstown on Monday. (iWN photo)

Prime Minister Ralph Gonsalves says he is happy when he sees women among workers under the government’s road cleaning programme.

The government recently spent EC$2.5 million on a road-cleaning programme, which coincided with the reopening of schools.

“We are doing this, as we usually do — one of the several we do every year and over 5,200 persons got short term work on this,” the prime minister told a press conference in Kingstown last Tuesday.

“I know one thing for sure, when a woman goes on the road and they’re working, they get a few hundred dollars, whether with a contract or the seven days work, or eight days or 10 days, whatever they get, one thing for sure, that money going buy a shoe for their children going back to school or a book bag.

“So I am happy when I see a lot of women doing the short — these are women who hold their households together, strong women, Caribbean women, looking out for their children for the next generation, to make sure that they send their children to school, in this education revolution, so that  — you think that thing that without this education revolution, Jinelle could be number two from New Grounds in London? Or, or Elroy will be — eh? And, staying in your constituency that Marcella going off to finish her final year in a biochemical degree? Ah just giving yo’ examples.”

Jinelle Adam and Elroy Lewis are minister counsellors at the SVG embassies in London and Taiwan.

They, along with Marcella are residents of South Central Windward, the constituency represented by Minister of Agriculture, Saboto Caesar, who also spoke at Tuesday’s press conference.