‘Joy and gratitude and excitement’ as Canouan high school opens 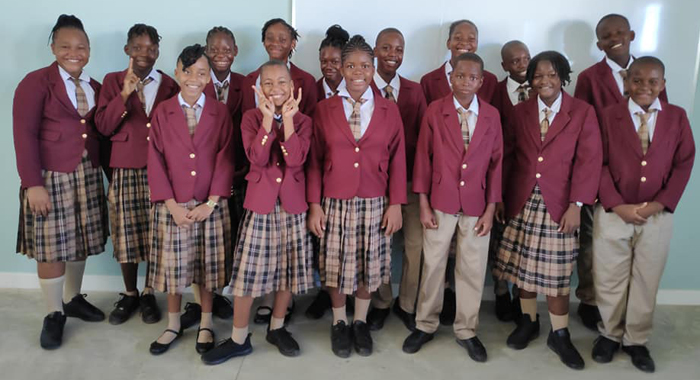 History was created in Canouan on Monday when the first batch of students at the island’s first high school commenced their secondary education there.

The opening of Canouan Secondary School brings to 27 the number of high schools in St. Vincent and the Grenadines.

“It is historic, not just for education, it is historic for Canouan,” Minister of Education, St. Clair Jimmy Prince — who visited the school on its first day, which coincided with the beginning of the 2019-2020 academic year — told iWitness News.

“It is in keeping with our policy of no child left behind and our policy of inclusiveness and that we are trying to ensure that there is access to secondary education throughout the country,” Prince said.

“And even though it is a small cohort, we still feel that the investment we are making in education in Canouan will be worth it in the long run,” he said.

Prince told iWitness News that 19 students are registered to attend the new secondary school and their parents are “very grateful and the students are all beaming with excitement.

“They started today, they looked well in their uniform and the entire Canouan community is happy that this has happened. Yes, it’s historic and absolutely significant for education and for the Southern Grenadines,” Prince said.

“The atmosphere was all joy and gratitude and excitement; everybody of Canouan,” Prince told iWitness News.

Classroom instruction for the secondary school students is taking place at a temporary facility.

This building will house one classroom, a science laboratory (lab), an IT lab, a library, and, among other things, a staff room.

Construction on the official secondary school will be carried out by Canouan Resorts Development Company.

Before the school was opened, students in Canouan had to travel to Union Island, the closest Grenadine island on which a secondary school is located, or to other parts of the multi-island nation in order to obtain a secondary education.

Some parents complained about the cost associated with their children travelling, via ferry, to Union Island every day, or problems finding accommodation for their children on mainland St. Vincent, where the bulk of the nation’s secondary schools are located.

The school was opened a few weeks after apprehensive residents of the island – two thirds of which have been allocated to tourism development — took to the streets to register their fears that the construction would not have been completed in time for today’s opening of schools.

In July, Member of Parliament for the Southern Grenadines, Terrance Ollivierre, spoke about the issue on radio, saying;

“This issue is agonizing… It reach to the point where not only parents but kids, CPEA kids who have their results have to be out protesting, trying to gain some sort of equality when it comes to access to secondary education.”

But that same month, Prime Minister Ralph Gonsalves reassured Canouan residents the secondary school would be ready in time for the new school year.

“When I spoke a few weeks ago and said to the people of Canouan, don’t worry you are going to have it, I know the naysayers and those only concerned with the negatives but I am not a lamentations man,” Gonsalves said.

In refuting claims that the Southern Grenadines is at a disadvantage when it comes to the sciences, the prime minister said Union Island Secondary School teaches all the sciences, including physics, and there are schools on St. Vincent that don’t teach physics.

Speaking then, Prince said the people of Canouan have been asking for a secondary school for years but the main concern had always been whether it would be sustainable with respect to the number of students and other related issues.