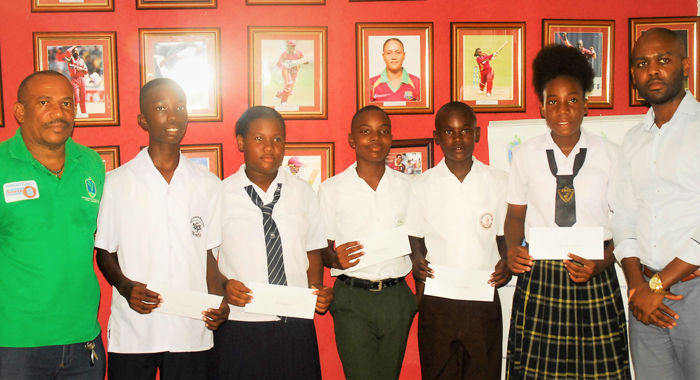 Five students were given assistance, Monday, through the scholarship programme of the St. Vincent and the Grenadines Cricket Association.

Speaking at the handing over ceremony at the SVGCA Secretariat in Arnos Vale, Assistant Secretary Cleton Burnette said that the scholarship programme is part of the SVGCA’s thrust towards the development of the young and rising generation.

“We are not only committed as far as cricket is concerned, but also to a holistic development, which also includes areas such as academics.”

Addressing the assembled parents, students, and media, president of the SVGCA, Kishore Shallow stated that his association has set out to ensure that “we empower our young people. We believe that cricket is not only about sports but also about holistic development”.

Shallow, who is also president of the Windward Islands Cricket Board of Control, and vice-president of Cricket West Indies, said that one tangible way of demonstrating the SVGCA’s commitment towards such holistic development is to provide financial assistance.

“This is how we came about this initiative to sponsor students; a small gesture in the grand scheme of things,” Shallow added.

Last year, four female students of the Georgetown Technical School were given assistance.

Shallow said the number of recipients might be increased to 10 next year.

He further stated that the academy programme has moved from 15 to 45 students, and the SVGCA continues to invest in young people.