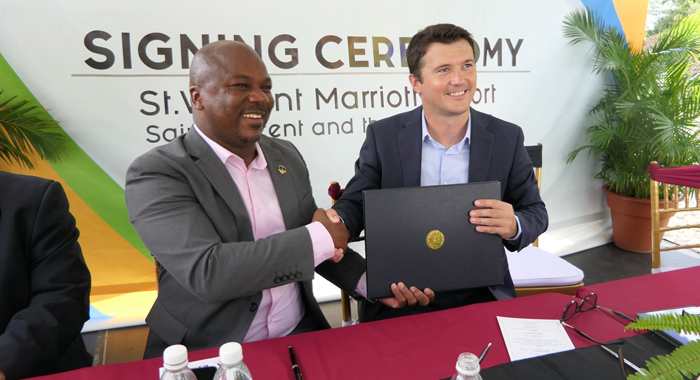 The government of St. Vincent and the Grenadines and Marriott International, on Tuesday, inked a deal for the management of a state-owned hotel, with Minister of Finance, Camillo Gonsalves, noting that the hotel chain is experienced in managing resorts on black sand beaches.

The Marriot Hotel will be constructed at Mt Wynne, on the western coast of St. Vincent, 11 miles from Kingstown and 22 miles from Argyle International Airport.

The Ralph Gonsalves government has borrowed US$50 million to build the 250-room hotel, which will be located on the sea front of a former plantation, in an area characterised by gently sloping fertile lands.

It will employ 250 to 300 persons, who Bojan Kumer, Marriott International’s vice president for hotel development — Caribbean and Latin America, said will have a tremendous opportunity to grow their professional careers and employ the world.

Gonsalves, who is also Minister of Economic Planning, Sustainable Development and Information Technology, told the ceremony at Mt Wynne, that the signing was two and a half years in the making.

“On this beautiful spot, in a couple years’ time, you are going to have one of the most spectacular resorts anywhere in the Caribbean bearing the Marriott brand,” he said of the hotel, which is expected to open in 2022, following the beginning of construction later this year.

He noted that over the past 30 years, governments have tried to woo hotel investors to Mt Wynne, adding that the lack of an international airport was a major impediment, as were other infrastructural challenges.

“… and tepid interest, to be frank, from investors 20 years ago and 25 years ago. And, in many cases, the absence of a credible developmental proposal that conformed with what the government felt this particular site deserved.”

Gonsalves, however, said that the opening of Argyle International Airport — in February 2017 — opened a window of opportunity “to not only revisit the idea of mass tourism development on St. Vincent but to establish the mainland as a new and dynamic player in the hospitality space across the Caribbean”.

He said that his government wanted to develop “a unique signature hotel in partnership with a major international brand that would set a new standard for tourism in St. Vincent and make a statement about the type of hospitality sector we intend to develop.”

The government wanted the hotel to be “sufficiently ambitious and noteworthy” so as to draw the attention of not only tourists but also potential developers to SVG.

The finance minister said that even as the government indicated its plan to build a 250-room hotel at Mt Wynne, it realised very early that it is not an hotelier.

Gonsalves said the government then decided to discuss with Marriott a management contract, “something in which they are coming in to lend us their experience, to lend their talent, to lend their expertise to the running of the facility”.

He said given “the limited availability of local skill, their non-experience in running a large hotel, the lack of an operation team and the government’s reluctance to engage in hotel management, the realisation that franchising and credibility would be easier with a strong brand in SVG’s corner, and the need for access to a major company’s development, design and operations support, the government chose to go with the legal arrangement that they took seven months to negotiate”.

The finance minister said that persons came to the country and said the location was good but they would have to replace the natural sand with white sand.

He said the government rejected the idea, saying they cannot market the natural, sustainable, environmentally conscious site if the natural sand is replaced.

“And Marriott has their own view and we appreciate that view and that experience,” he said.

“This is tremendously exciting for St. Vincent and the Grenadines and the development of our people and our country…

“The Marriott International is one of the largest hotels chains in the world, it has a proven track record, …  it has a record of quality that is undisputed, it has a global reservation system, it has a in-built market of [millions of] Bonvoy members, that’s their sort of frequent flyers club, who will want to use their frequent stay points at new hotel, at new locations and they have a marketing system in place to market not only to their Bonvoy members but to market internationally, the new hotel and destination.”

Gonsalves said the Mt Wynne Marriot will be a jewel in the crown of Vincentian and Caribbean tourism.

“It is a declaration of intent that St. Vincent and the Grenadines will be a major unique sustainable player in the hospitality industry and it will be a catalyst for tourism and hospitality services across this country.

“I could not be happier to here today and I want us all to join in welcoming Bojan and Marriott International to the shores of St. Vincent and the Grenadines,” the finance minister said.

“… today, it really gives me great pleasure that we are here, that we are going to sign this agreement between National Properties Ltd. that represents the government of St. Vincent and the Grenadines in this project and Marriott international.”

Meanwhile, Kumer said the hotel should set, actually, the new standard for all future developments in St. Vincent.

Speaking at the same ceremony, head of the SVG Tourism Authority, Glen Beache, said that the black sand beach was a point of discussion during the negotiations.

“…in the discussions with Marriott, and this is something we were all looking at, they made it clear, they said listen, we have hotels all around the world and we’ve managed properties that have black sand beaches.

“Because there was this worry that the black sand beach would be removed and we would be placing white sand over it. And they assured us that they would keep the black sand beach because they know how to manage it. They have that experience. And that was one of the great things I appreciate about it…” Beache said.