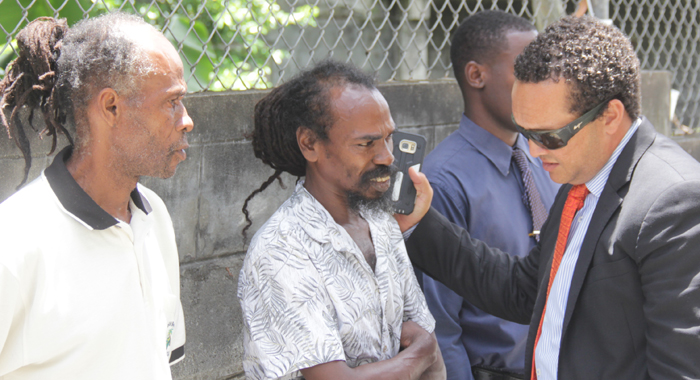 A lawyer and activist for liberalisation of marijuana is speculating that the ganja cultivation amnesty and the campaign for the next general elections in St. Vincent and the Grenadines will coincide.

Grant Connell made the suggestion on Wednesday at the Serious Offences Court in Kingstown.

He was, at the time, mitigating on behalf of Alvin Williams, 46, of Questelles, and Irwin Thomas, 56, who pleaded guilty to charges that on Sept. 4, at Walliabou, they, respectively, had in their possession 1,816 grammes (4lbs) and 4,540 grammes (10lbs) of cannabis with intent to supply.

The men were each charged with possession for having been found in possession of the respective amounts for the purpose of drug trafficking, but Senior Prosecutor Adolphus Delplesche withdrew those charges after the defendants accepted the facts.

Williams and Thomas were among five men — and three goats — on board a boat in Walliabou when the Coast Guard intercepted it.

The men each told police the respective parcels of marijuana belonged to them.

In his submission, Connell noted that changes were made to the marijuana law in SVG, as part of the establishment of a medical marijuana industry.

He however, pointed out that the definition of cannabis under the medical marijuana law is the same as under the Drug Prevention of Misuse Act.

The law includes a one-year amnesty on marijuana cultivated illegally, beginning at a point to be determined by the government.

Connell said that if that amnesty were already in place, his clients could have avoided a charge.

“I, Grant Connell, propose that it is going to start in January and run one year at the end of which year — with much money income — … I propose there will be another occasion, and my friend here can elaborate on that,” he said, referring to counsel Carlos James, a government senator.

James, who was not involved in the case, was sitting at the bar table.

James represented the ruling Unity labour Party in the North Leeward in the December 2015 general elections and is likely to be the candidate again next election.

General elections are constitutionally due by March 2021, but are widely expected by December 2020.

Connell noted that his clients had pleaded guilty at the first opportunity, thereby not wasting the court’s time.

The lawyer said that Williams, who has 25 years’ experience in the mountains, is one of the 1,500 marijuana farmers who are now being celebrated with the pivot to the medical marijuana industry.

“Yes. Now, why shouldn’t I send him to prison?” Chief Magistrate Rechanne Browne told the lawyer.

Connell said that on the day in question, Williams coming from the mountain, had a few goats with him.

He noted that marijuana, a class B drug, and cocaine, a class A drug, carry the same sentence: on summary conviction a sentence of up to seven years in prison and EC$20,000 and, on indictment, 25 years in jail and EC$1.5 million.

In light of the “prima facie spirit and intention of Parliament thus far”, Connell asked the court to “break from the norm of imposing harsh and unconscionable sentences on men like this”.

He suggested that Williams be fined EC$500.

Connell said that based on an affidavit by Junior “Spirit” Cottle, the price per pound of marijuana over the past 30 years has been EC$300, falling to EC$200 when there is a glut.

He said this means that the 10lbs that Thomas has in his possession had a value of EC$2,000.

The lawyer said that like Williams, Thomas is a man of little means and, therefore, imposing a harsh fine would be sending them to jail.

He asked the court to impose the fine “and let your conscience be your guide”.

The lawyer said a man chopped up a woman and get station bail but it is denied for marijuana possession.

“Those who make the laws are not thinking,” he said, holding to James’ shoulder.

“Why you holding on to James?” the chief magistrate said, triggering laughter in the courtroom.

Connell said that with the marijuana cultivation licences being issued, the sector will now be “in the hands of the foreign man”.

The lawyer told the court that a licence had been granted for the cultivation of 300 acres of marijuana.

“More than they can ever imagine,” he said.

In his submission on sentencing, Delplesche told the court that he was not looking for a custodial sentence and suggested a fine according to the men’s means.

For his four pounds of weed, Williams was ordered to pay EC$2,000 forthwith or one year in prison.

iWitness News understands that the men have paid the fine.

15 replies on “Lawyer speculates ganja amnesty will coincide with election”