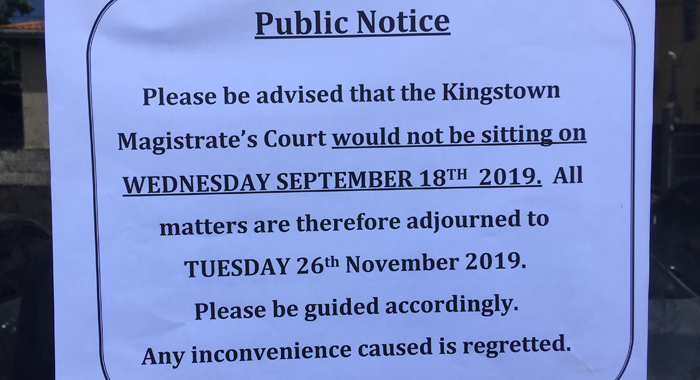 The Kingstown Magistrate’s Court has been closed six Sept. 2 and has only sat for three months this year. (iWN photo)

The government is looking for a magistrate to fill in at the Kingstown court as Senior Magistrate Rickie Burnett has been once again been appointed to act as a High Court master.

However, Prime Minister Ralph Gonsalves has noted that it is a challenge attracting persons to the magistracy because of the salary compared to what a lawyer can earn in private practice.

“So if you get any, you have to get them on a temporary short term basis or you get someone with the number of years’ experience who might be inside of the attorney general’s chambers or maybe somebody who is retired or somebody you can get from overseas at a fairly short notice,” he told a press conference in Kingstown on Tuesday.

“But it is always difficulties in getting good magistrates at the salaries which are being paid.  This is a problem that is affecting all the magistracies throughout the Caribbean, not just the OECS,” he said, referring to the Organisation of Eastern Caribbean States, of which St. Vincent and the Grenadines is a member.

When Burnett had a similar acting stint from January to May this year, the Kingstown Magistrate’s Court remained closed, resulting in a backlog of cases.

Burnett has been appointed to act as a master from Sept. 15 to Dec. 21, 2019 and will be assigned for duty in St. Vincent and the Grenadines, Anguilla and Grenada.

In late August, defence counsel Grant Connell asked Burnett if the court would be closed during the three months when he is at the High Court.

Burnett said while it is not his responsibility to find a new magistrate, before accepting the new assignment, he asked about whether the court would be closed.

“And I was assured that someone would be here,” he said.

The Kingstown Magistrate Court has remained closed since Sept. 2, when Burnett went on vacation ahead of his acting master assignment.

Gonsalves said he has spoken to Attorney General Jaundy Martin on the matter and told him that the state needs to get someone to act at the Kingstown Magistrate’s Court.

He said the matter is an important one that the government has to keep at the forefront and ensure that it is dealt with swiftly.

The prime minister said he also suggested to the attorney general that he hire somebody from the private bar to do night court for a few months to help with traffic matters and a few other things.

He said this would make it easier for the minibus operators and other people.

“Because I see a pressure building up there again,” the prime minister said.

The attorney general is overseas on official business.

The prime minster said the issue of a magistrate for the Kingstown court is one that he is very concerned about.

The prime minister said that while the chief magistrate handles significant criminal matters, resolution of a lot of disputes between citizens are postponed and this is never a good thing.

He said that the government has to make sure that there is always a full complement of magistrates and to increase the number, temporarily, where there are pressure points.

“But also for the existing magistrates, for all of them, to seek to pull their weight in a manner which is true to their oath and calling,” he said.

“I am not making any criticism of any particular magistrate but 90-something per cent of the dispute between citizens, whether of a criminal nature or a civil nature, they go before the magistrate court for resolution.”

The prime minister said there are people who would seek redress at the magistrate’s court numerous times in their lifetime but would never go to the High Court.

2 replies on “Gov’t looking for magistrate for Kingstown court”