Clinic has no stretcher for injured pedestrian 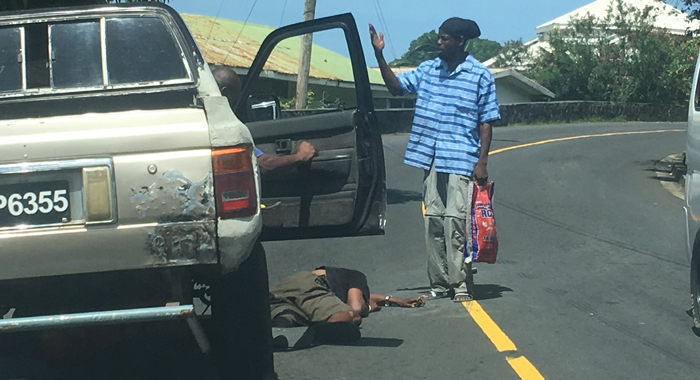 The man was injured after he was allegedly struck by this motor vehicle. (iWN photo)

A man who appeared to have fallen unconscious after he was reportedly struck by a vehicle just outside a clinic had to be aided in walking to the health centre after a concerned citizen was told there was no stretcher there.

A member of the public went to the clinic shortly after the accident but was told that there was no stretcher there.

The man, a Vincentian who is based overseas, expressed shock at such a situation.

iWitness News came up on the accident shortly after it occurred, and even as the man, who appeared to be unconscious, was lying on the road, near the vehicle.

The man, a Barrouallie resident, was reportedly struck by the vehicle, P6355, a pickup, as he was crossing the street.

Immediately after the incident, the injured man, who had what appeared to be blood coming from his forehead, was lying unresponsive on the hot road.

Sometime later, he began to move and persons were of differing opinions about whether they should take him to the health centre themselves or wait for a response from until the staff there.

The first staff member of the clinic to respond was a community health worker, who someone quickly asked whether there was a nurse at the clinic.

A nurse arrived at the scene shortly after.

By this time, the injured man had become responsive and some persons aided him in walking to the clinic.

An off-duty police officer who happened to have been passing by took control of the scene and marked where the injured man had fallen and where the vehicle had stopped after the incident.

A health care practitioner in St. Vincent and the Grenadines told iWitness News that while many clinics in the country do not have a stretcher, it is not unreasonable to expect that they would have one.

He said this is apart from any stretcher that might be inside an ambulance.

The healthcare professional said that stretchers are important in transporting injured persons, especially seeing that injuries suffered might have lasting implications for their mobility.

15 replies on “Clinic has no stretcher for injured pedestrian”