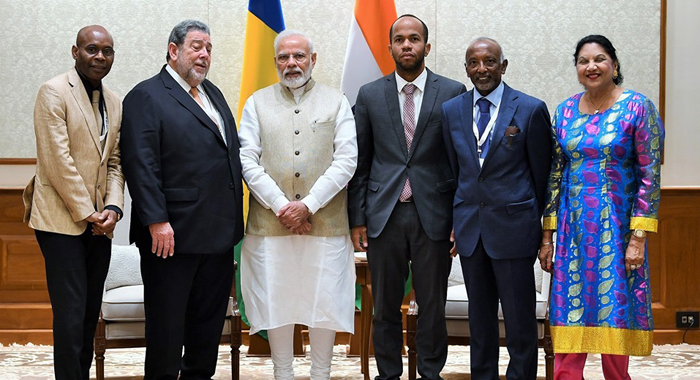 The government of St. Vincent and the Grenadines (SVG) has signed three agreements with its Indian counterpart during Prime Minister Ralph Gonsalves’ recent visit to the subcontinent.

Gonsalves travelled to India on Sept. 9 for a five-day visit, during which he co-chaired the high-level roundtable discussion on “Land, climate change and renewable energy” during the 14th Conference of Parties to the United Nations Convention to Combat Desertification (UNCCD).

Gonsalves told a press conference in Kingstown on Tuesday that during the visit he also met with the foreign minister of India.

Cenio Lewis, Kingstown’s high commissioner to the United Kingdom and non-resident high commissioner to India, who was part of Gonsalves’ delegation, signed an agreement addressing the matter of the exemption of visa requirement for holders of diplomatic and official passports to facilitate the ease of doing business between officials and diplomats.

Senator Luke Browne, SVG’s minister of Health, signed a memorandum on cooperation in the field of traditional systems of medicine.

And Gonsalves signed the framework agreement on the establishment of International Solar Alliance, which has nearly 80 members.

Gonsalves said there are three other agreements that Kingstown and New Delhi are working on and will sign shortly, including cooperation in the field of health and medicine, and a memorandum of understanding on the setting up of an information technology centre of excellence at Diamond.

Gonsalves noted that India is well known for its research work in information communication technology.

He said that “policies, therefore, have to be attuned, accordingly and our people must see the importance.”

The prime minister said there is a draft agreement on a cultural exchange programme.

India had contributed a US$1.3 grant for upgrading SVG’s arrowroot industry.

Gonsalves said he and Modi spoke about exchanges in education and training and health, ICT and culture, enhancing their work in international relations.

On the issue of climate change and land degradation, India will send some experts to help SVG because they have a strong programme in this regard.

The leaders also discussed the possibility of establishing a mission in New Delhi.

“We are looking at how we can keep it very cheap. Early discussions — because paying the staff, an ambassador and a minister counsellor, is not really the big burden. It’s the cost of office space and housing, those sorts of things. There is a way in which we can address those,” the prime minister said.

He said he discussed with Modi, assistance to the Bahamas and India` has given US$1 million to the hurricane-affected nation.

Modi and CARICOM will meet next week in New York, where a range of matters will be discussed, Gonsalves said.

“I made some suggestions to him. I don’t want to speak on those suggestions because I would wait to see whether he took them on board and had them incorporated into his own approach,” Gonsalves said, adding that he and Modi have a very good relationship.