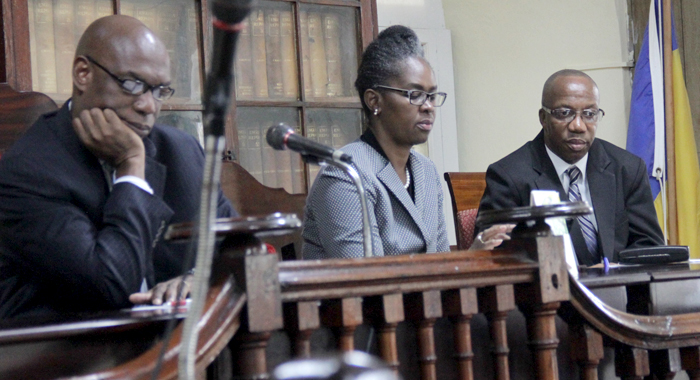 From left: High Court judges, Justices Brian Cottle and Esco Henry along with Master Rickie Burnett at the bench ahead of the start of Tuesday’s simulcast. Justice Nicola Byer, who was also at the bench, is not captured in the photograph. (iWN photo)

The Eastern Caribbean Supreme Court (ECSC), on Tuesday, launched five sentencing guidelines, with the chief justice saying they “are not intended to and do not replace the exercise of a sentencing officer’s discretion”.

“Rather, what is required and what is expected is that sentences will follow the guidelines published for an offence unless to do so would not be in the interests of justice. Accordingly, where a sentencer departs from the guideline, clear reasons for so doing must be given when passing the sentence,” Justice Dame Janice M. Pereira said at the launch in Antigua, which was simulcast in all nine jurisdictions.

The first batch of sentencing guidelines comes into effect for application by the Supreme Court and the magistracy on Oct. 1.

The court is expected to pass guidelines for sentencing on other crimes by next Easter.

The chief justice said sentencing of an offender is an extremely serious matter and “an awesome responsibility on the shoulders of any judicial officer in seeking to ensure that the sentence he or she passes is fair and just having regard to the facts and circumstances of each case and in accordance with the law”.

She further said that sentencing is one of the areas of greatest public interest and comment, sometimes uninformed.

“All one has to do is to read the news, whether online or in print or even listen to debates from time to time in some legislative branches of government to appreciate the keen interest of the public in sentences passed by the court.

“It is, therefore, of utmost importance that the public has and maintains confidence in the administration of justice,” Justice Pereira said.

She said one way of maintaining and promoting public confidence in the criminal justice system is by employing measures which demonstrate consistency of approach and providing clear reasons for sentences passed on offenders.

“This, in turn, improves and promotes transparency and engenders a level of certainty in respect of outcomes.  The utilisation of a consistent and structured approach also ensures that an outcome is easily understood,” she said.

She said prosecuting and defence counsel are under a duty to assist the court in the application of the guidelines and so they must become fully au fait with the rules, the practice directions and guidelines.

She said it is hoped that the approach that has been adopted will make the task of sentencing easier for judicial officers.

But, more importantly, Justice Pereira said, it is hoped that the approach taken will lead to the production of well-reasoned sentencing remarks by judicial officers that can be easily understood by offenders, victims and members of the public in general.

“It is also our hope that in time, those sentencing remarks will build up a bank of sentencing jurisprudence which can be used by practitioners, students of the law and others.   This, in turn, will go a long way towards building and maintaining public confidence in the administration of criminal justice,” she said.

Justice Pereira said Tuesday’s launch was the culmination of extensive work undertaken under an initiative by the court aimed at promoting and streamlining the court’s approach to sentencing across its nine-member jurisdiction.