Women detained for contempt of court 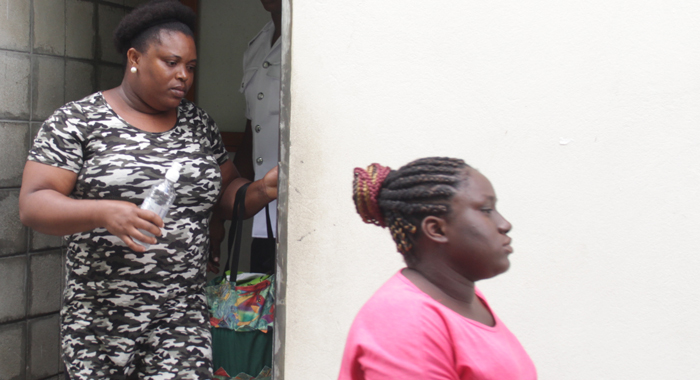 Two women were, on Monday, detained at the Central Police Station for contempt of court.

Chief Magistrate Rechanne Browne ordered that the women, Bernadette Myall, of Georgetown, and Tannisha Jennings, of Lowmans Leeward, be detained after they disrupted her court.

When the women entered the Serious Offences Court together shortly before 1 p.m., the chief magistrate asked one of the police orderlies if it was them who had been so loud in the corridor moments before.

An officer had repeatedly called for silence in the corridor, which doubles as a waiting area.

However, the chief magistrate was told that it was another woman who had been loud outside the courtroom.

But no sooner had Myall taken her seat than she started to speak audibly to one of the prisoners seated in the courtroom.

Speaking to prisoners in the courtroom without the expressed permission of the police is prohibited.

On seeing the exchange between Myall and the prisoner, a police officer rebuked her and the chief magistrate ordered both women to leave the courtroom.

But, as she was told to leave, Jennings kissed her teeth (“steups”) loudly, resulting in the chief magistrate ordering that the women be detained.

The women were placed to sit on the prisoners’ benches.

However, Jennings continued with her disruptive behaviour even as court officials told her about the inappropriateness of her actions.

When the chief magistrate rose for the day shortly after 1 p.m., she left the two women sitting on the bench with the other prisoners but gave no instruction about what was to be done with them.

iWitness News was later informed that the chief magistrate ordered that the women be detained until 5 p.m.

The women, along with other prisoners, left the courtroom precinct shortly after in an unmarked police vehicle.

iWitness News understands that under the contempt of court law, the court could have ordered that the women be detained for two days.

The women were said to be relatives of Augustine Jennings, of Lowmans Leeward who was, one week earlier, jailed for possession of an offensive weapon, to wit, a knife.

Jennings was back in court for bail review on a charge that on Sept. 13, at Lowmans Hill, he caused grievous bodily harm to Garfield Nero of Campden Park, intending so to do.

The chief magistrate deferred bail review until a later date in light of Jennings’ prison sentence which he is currently serving.

6 replies on “Women detained for contempt of court”