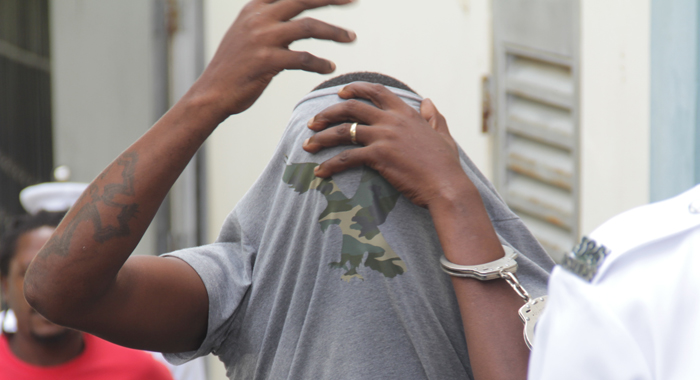 Zeno Audain uses his shirt to hide his face outside the Serious Offenses Court on Monday. (iWN photo)

A Buccament Bay man was, on Monday, jailed for 10 months for slapping his ex-girlfriend, a traffic warden.

Zeno Audain pleaded guilty to the charge that on Sept. 4, 2019, at Richmond Hill, he assaulted Alberta Edwards, of Layou, occasioning actual bodily harm.

Edwards was in the uniform the Royal St. Vincent and the Grenadines Police Force traffic wardens when Audain slapped her, causing her to fall to the ground and her cap to fall into a gutter.

The court heard that about 10:45 a.m. on Sept. 4, Edwards was on duty at the Richmond Hill public road, when she saw Audain walking along the public road.

She saw him pick up a cutlass at the University of the West Indies Open Campus building, where construction is taking place.

However, a worker at the site told Audain to put down the cutlass and he did so.

Audain left the compound, approached Edwards and began to curse at her, but she did not respond.

Audain then slapped Edwards in the face, causing her to fall to the ground and her cap to roll into a gutter.

A young man came to her assistance and took her to the Central Police Station in Kingstown.

In mitigation, Audain told the court that there is a long-standing feud between him and Edwards, whom he accused of depriving him of the opportunity to go to Canada to meet his wife.

He said that Edwards had contacted officials at the Canadian immigration at their outpost in Trinidad and caused him to be deprived of the opportunity to travel.

He said that as a result of Edwards’ action, the Canadian authorities have cancelled his application.

He said he has gone to the police several times and Edwards had admitted to and apologised for her action.

Audain said that the situation makes him feel down, adding that he had a letter that Edwards had written affecting his chance of migrating.

The court did not allow him to read the letter.

He said that he has complained to two police chiefs, namely Michael Charles and Colin John, who both had promised to look into the situation.

“I was feeling so depressed; so down,” Audain was saying when the chief magistrate stopped him, saying that he was before the court for assaulting Edwards.

Audain then asked the court to show leniency, saying that he had already forgiven a police officer who had kicked him down as he was on his way to a scheduled meeting with the police chief.

Audain asked for the court’s forgiveness, saying he would apologise to Edwards for assaulting her.

But Senior Prosecutor Adolphus Delplesche said that Audain’s was an unprovoked attack on Edwards.

He added that whatever issues might have existed between them, the police chief had said that he would have dealt with them, but needed time to do so.

Delplesche also noted that a few weeks earlier, he was at the Kingstown Magistrate Court when Audain was brought up on a charge of threatening to kill Edwards.

He noted that Edwards gave Audain a chance when she decided not to pursue the matter.

Edwards told the court that she was not pursing the matters, resulting in Audain being freed.

The prosecution asked the man what he was going to do with the cutlass that he picked up on Sept. 4.

Audain told the court that that he was not going to do anything with it.

The prosecutor observed that the attack took place in broad daylight when the officer was on duty.

He further pointed out that Audain has two convictions for wounding, adding that this shows a propensity for violence.

“I can’t see him escaping a custodial sentence,” the prosecutor said.

But Audain told the court that he had been walking a thin line for a very long time, adding that circumstances make people do things.

He again asked for forgiveness.

Delplesche, however, said that forgiveness does not mean escaping punishment.

Meanwhile, the chief magistrate said that many people in the society are walking a thin line, but this is no excuse for violence.

The magistrate began with a starting point of five months in prison and added two months for each aggravating feature.

This brought the sentence to 15 months.

Audain benefited from the one-third discount for an early guilty plea, which saw his sentence falling to 10 months in jail.

4 replies on “Man jailed for slapping cop in uniform”