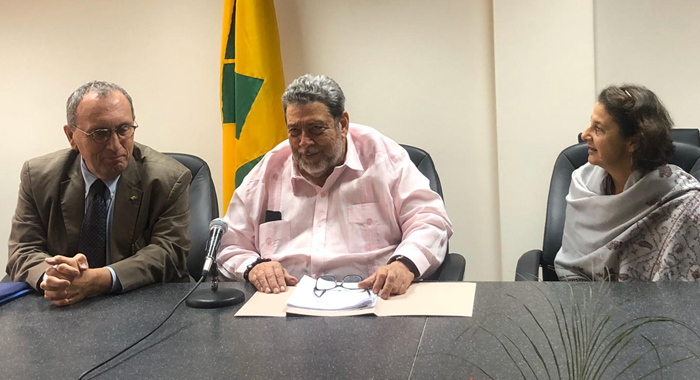 A high-level delegation from the European Commission, met with Prime Minister Ralph Gonsalves, members of his cabinet and senior public servants last Thursday in Kingstown.

The delegation, led by Stefano Manservisi, director general for International Cooperation and Development, held discussions with the local team, headed by Gonsalves, to assess the status of the partnership between the European Union and St. Vincent and the Grenadines as well as visit a number of projects financed by the European Union.

The one-day visit to SVG was part of a wider regional mission being undertaken by the European Commission delegation.

In addressing the meeting, Gonsalves noted that the European Union is SVG’s country’s single largest source of grant funding and a critical development partner that has been with SVG on very important focal sectors.

Manservisi, who is making way for his replacement, outlined that the assessment forms part of a comprehensive brief that would include the status of the work being done by the EU in the Caribbean, that he intends to hand over to his successor.

The outgoing director general congratulated SVG on its election to the United Nations Security Council and highlighted the significance of this, not just for SVG but for the entire region.

He suggested that this is an opportunity for the EU and SVG to work together to achieve more for the region.

Following the discussions at Cabinet Room in Kingstown, the visiting delegation, which also included Felice Zaccheo, head of division for Caribbean

Countries, Ambassador Daniela Tramacere, head of delegation and political advisor from the Delegation of the European Union to Barbados, Ovidiu Naftanaila, visited a number of projects that were financed through funding from the European Union. The mission ended with a cocktail at the VIP Lounge at the Argyle International

Airport, where the visiting delegation interacted with other stakeholders, including trade union leaders, farmers and members of the Chamber of Industry and Commerce.