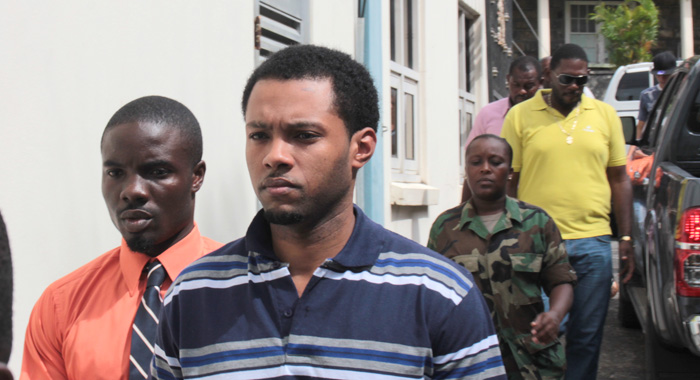 Vermont resident Veron Primus arrives in court on April 22, 2016, charged with the murder of real estate agent Sharleen Greaves, who was killed between Nov. 13 and 14, 2015 in her Arnos Vale office. Primus came to the attention of law enforcement after a 24-year-old Vermont woman. Mewanah Hadaway accused him of holding her hostage for four months ending April 2016. After he was charged in St. Vincent, prosecutors in New York went on to indict him in the 2006 murder of one of his friends in that North American city.  (IWN photo)

Accused murderer Veron Primus is back into custody after escaping from Her Majesty’s Prison in Kingstown on Tuesday.

A police source told iWitness News that Primus turned himself in to police, accompanied by lawyer Jomo Thomas.

However, it comes at a time when a prison officer told iWitness News that there is a serious shortage of staff at Her Majesty’s Prison in Kingstown.

Primus, 32, is awaiting trial on a charge that between Nov. 12 and 13, 2015 at Arnos Vale, with malice aforethought, he caused the death of Sharleen Greaves by an unlawful act.

Greaves, a 33-year-old real estate agent was found in her office in Arnos Vale with stab wounds to her body.

Primus has also been indicted in the United States in connection with the murder in 2006 of one of his female teenage friends.

Further, Vermont resident Mewanah Hadaway has accused Primus of holding her captive for four months at a home in the South Leeward village and he is awaiting trial on several charges related to that allegation.

2 replies on “Escaped prisoner Veron Primus back in custody”