Sister party tells NDP to learn from its mistakes 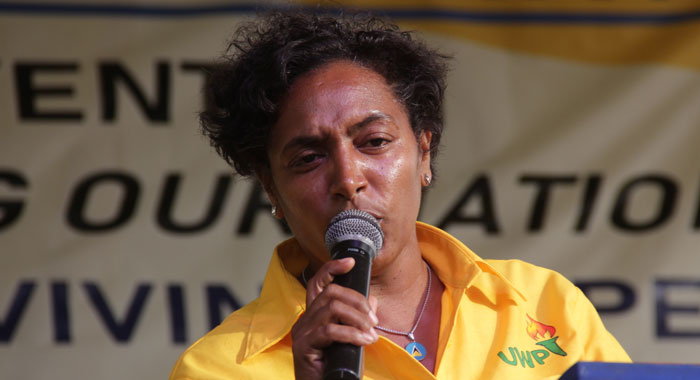 A sister party to the main opposition New Democratic Party (NDP) has urged the party to learn from its mistakes as it continues its bid to retake the reins of government.

She told the NDP’s 41st convention in Arnos Vale on Sunday that during her party’s’ victorious 2016 election campaign, the UWP repeatedly told St. Lucians that the definition of insanity is doing the same thing over and over again and expecting a different result.

“And the people of St. Vincent have been doing the same thing over and over again and expecting a different result. It is time to change. It is time to do things differently in St. Vincent and the Grenadines,” she told supporters of the NDP, which has lost the last four general elections.

She said there must be change in order for a country to develop and its economy to grow.

“And change, my people, is not a bad thing. Change simply means that you must do things differently,” said Charles, who is director of implementation in the office of the prime minister in Castries.

Charles said she has repeatedly heard the NDP say that the Unity Labour Party (ULP), which has been in office since March 2001, has been stealing the elections.

“You must learn from the mistakes of the past; you must be on guard; you must be watchful so that you can ensure that come the next election, the things that happened to you before, it does not happen to you again. That is change,” Charles said.

The NDP was holding what could be its last convention before general elections, which are constitutionally due by March 2021, but are widely expected by December 2020.
She noted the theme of the NDP’s convention — “Unifying our nation: Reviving Hope” — adding that there was no country as polarised by politics like St. Lucia.

Charles placed this situation at the feet of Kenny Anthony, who held the premiership 1997 to 2006.

“And I am pretty sure you know about that in St. Vincent right now. But I want to beg of you, when you become the next government, do not treat them the same way that they treated you.

She said that the countries of the region are struggling with the same issues, including bad roads, lack of proper healthcare system, “polarisation of everything that happens in the country”, and high unemployment.

“But, as your sister party in St. Lucia, I can assure you that when you elect Dr. Friday and this team of men and women right here, the assistance, the support, the dream and the vision, we will give you that support from the government and the people of St. Lucia.”

She asked persons to consider what has changed in their community since the ULP came to office almost two decades ago.

“What has changed?  What is different? What is new? Where are you heading as a country? And that is why I am saying to you that change is here. And if you want the change, my brothers and sisters, it will not come to you; you have to make that change, you have to go out there and you have to make it happen.”

Charles urged NDP supporters to respond, to the stand up and be counted when the NDP calls on them to do so.

“Are you ready to make that change? … Are you all standing here registered to vote? Are you sure that your name is on the voter’s list?  Do you have your ID card? Did you check to see that it has not expired? Are you sure that the 18-year-olds in your homes and your communities, your friends, are they registered?  This is how you show you are ready … and on Election Day, you go out, you mobilise, you take your vehicle, you take your friends and you bring them out to vote so that you can make these men and women your new government of St. Vincent and the Grenadines.”

She told party supporters to reject the “tricks”, including the handouts of construction material and temporary jobs “to try and fool you” just before an election.

“But you know what we did them in St. Lucia?  We said to our people, take the money, take the plywood, take the cement, eat it and vote them out…” she said to cheers.

“When they give it to you, take it. If you need it, take it. But, know at the back of your mind that you don’t need that just for that day. You want sustainable jobs, you want proper health care, you want a good education system, you want proper roads and that will only come if you vote for the NDP under the leadership of Dr. Friday,” Charles said.