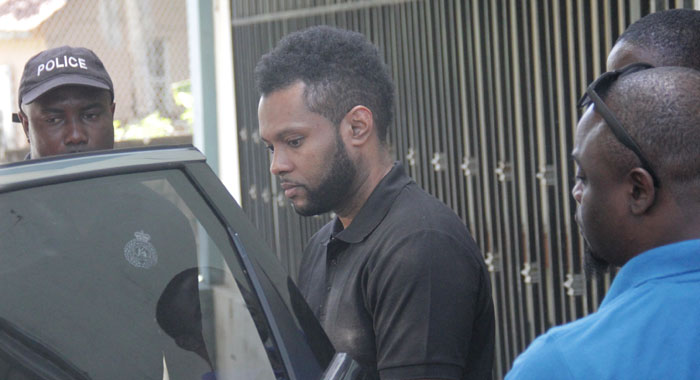 Accused murderer Veron Primus, 32, on Wednesday chalked up his first conviction in St. Vincent and the Grenadines when he was jailed for 16 months for escaping lawful custody.

The Vermont man Primus pleaded guilty to a charge that between Sept. 30 and Oct. 1, 2019, at Kingstown, while being held on remand at Her Majesty’s Prisons, he did escape such lawful custody.

The offence carries a maximum sentence of three years in prison and Chief Magistrate Rechanne Browne began with a custodial sentence of 22 months.

She added six months for each aggravating feature of the case, which included the fact that Primus was on remand for a serious crime when he escaped.

Browne took away two months for each mitigating feature, which included the fact that no violence was used and that Primus returned to custody voluntarily.

At the end of her calculations, the chief magistrate arrived at a sentence of 24 months in prison, from which she subtracted one-third for Primus’ early guilty plea.

“Thank you,” Primus told the court when the sentence was handed down.

He then returned to the dock to ask if the sentence would begin on Wednesday, the day on which he was convicted, or if it would be affected by the time he had spent on remand.

The magistrate explained that the sentence had no relationship to time he spent on remand.

In presenting the facts, Senior Prosecutor Adolphus Delplesche told the court that at 3 p.m. on Monday, Sept. 30, the prison was locked down and Primus was accounted for.

About 11 p.m., the shift at the prison changed and Primus was also accounted for, the prosecutor said.

About 7 a.m. on Tuesday, Oct. 1, the shift changed again and around 10 a.m. that same day, Primus was not accounted for.

Delplesche said that an alarm was raised, the matter was referred to the Superintendent of Prisons and the police were informed.

The senior prosecutor said that a wanted bulletin was issued to the media, including social media.

Head of the Major Crime Unit, Inspector Elgin Richards, cautioned Primus but the escaped prisoner made no statement.

Delplesche told the court that Primus has no previous convictions.

When Chief Magistrate Rechanne Browne asked Primus what he had to say to the court before being sentenced, he asked if he could ask a question.

Primus further said that Delplesche had said he (Primus) was accounted for at 3 p.m., but the prosecutor said he had not said that.

Primus later said that the point was not an important one.

In mitigation, Primus told the court: “I did return voluntarily and I did plead guilty at the first opportunity.”

Primus arrived at the court in handcuffs, escorted by plainclothes officers from the Major Crime Unit, which investigates the most serious crimes in St. Vincent and the Grenadines.

The team was led by Inspector Richards, who, at six foot 3 inches tall, appeared to tower over the 5 foot 5 inches Primus as they walked the short distance from the vehicle to the court building.

The senior police officer held on to the left arm of the handcuffed prisoner.

In court, Primus, who seemed to have recently had a haircut, sat mostly quietly as he awaited arraignment on a day mainly reserved for traffic matters.

At one point, he spoke in an aggressive-sounding voice to someone in the courtroom about the taking of a photo, but iWitness News was unable to determine to whom the accused man had directed his comments.

On Tuesday afternoon, Primus called Thomas, his court-assigned attorney in the murder case, telling the lawyer he was at the Grammar School Playing Field in Richmond Hill and asked Thomas to escort him back into police custody.

Primus escaped from the maximum-security section of the prison, where he was being held as he awaits trial in connection with the November 2015 murder of 33-year-old real estate agent Sharlene Greaves.

Commissioner of Police Colin John told the media on Tuesday that St. Vincent and the Grenadines has received an extradition request, but that it would be considered at the end of the local legal proceedings.