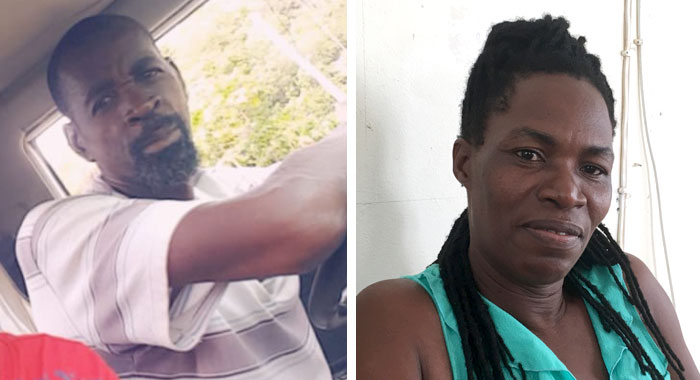 The deceased George Samuel, right, and his widow, Iris Samuel.

An Evesham woman is struggling with the suspected murder of her husband and the fact that police have taken their two sons into custody as part of a homicide investigation.

Dead is George Samuel aka “Coban”, 56, a farmer, of Evesham, whose body was found Tuesday night in a shallow grave about 100 yards from his home.

The death ended his 21-year marriage to Iris Samuel. The couple had two sons and a daughter.

Iris told iWitness News in Evesham on Wednesday that police took her younger son, Keron Samuel, 19, into custody Tuesday night after his father’s body was unearthed.

On Wednesday, detective took the older son, Keon Kendol Samuel, 34, into custody as the investigation continued.

Iris told iWitness News that she lives between two houses, located about half mile apart in the Marriaqua village, while her husband lived in one of those same houses with their sons.

She said she last saw Coban on Saturday when he gave their daughter a ride to a nearby community.

Iris became concerned when her husband did not come by on Monday night as he would usually do.

She, however, dismissed it saying that he might have had a hard day and would visit on Tuesday.

She wanted him to do something for her on Tuesday and was looking forward to seeing him.

However, when Coban did not visit by early afternoon Tuesday, Iris called his cell phone but did not get an answer.

She then decided to visit his house to check on him.

Iris said she waited in vain for Coban at the house where he lives with their sons.
She said she decided to check to see if he had gone to the mountains, where he farms.

However, the woman saw, at the house, her husband’s work clothes and boots that he usually wore to the farm.

“Me say, ‘No. This is not [like] he’,” Iris recounted, adding that Coban’s cutlass was also at the house.

Further, his pickup was in the garage, the key to the vehicle was on the table and his phone was in a basket, where he doesn’t usually leave it.

The woman said that Keron, who does not talk to her because of a dispute they had had, was in the yard.

She said that Coban had taken Keron back into the home after she had obtained the assistance of the police to evict him because of what she said was his bad behaviour.

Iris told iWitness News that while at Coban’s house, she began reasoning to herself, saying out loud that she was wondering where her husband was and that she wanted him to do something for her.

However, Keron did not comment, but responded when she asked about who had changed the curtain at the front door.

The widow said Keron told her that Coban had changed the curtain and on hearing this, she became uncomfortable because that is not something that Coban would do.

“Me pick me bag and me lead out because to me I know Coban wouldn’t change no curtain. Me kinda feel uncomfortable,” the widow told iWitness News.

She said that about 3 p.m., about one hour after she initially went to Coban’s house, she went back to the second house where she also stays, and asked patrons at a shop next door, where Coban usually hangs out, if they had seen him.

When they said no, Iris told iWitness News she thought something was fishy.

One of the men asked if Coban had animals and when she said he had a sheep, they suggested that they search the areas where he ties the animal to see if he had fallen ill there.

As the search continued sometime after dusk, they followed a track and began noticing some bushes had been chopped down and others were trampled.

A member of the search party lifted up a bush in an area where there was a foul odour, and revealed what appeared to be blood.

They then decided to call the police, who later realised that someone was buried there.

She said that Keron, the younger son, was present when police uncovered the body, but he said nothing.

Iris had earlier sent Keon, the older son, back to the house, because he appeared not to have understood why so many persons were in the yard and was asking who they were and why they were there.

She said that when her husband’s body was removed from the shallow grave, she noticed he had what appeared to be a curtain rod wrapped around his neck.

“I said, ‘Oh no! Is strangle they strangle him’,” Iris said, adding that she then broke down in tears.

Samuel said that the death of her husband and the fact that her sons have been taken into custody for it have left her feeling sad, adding that the latter is an unexpected development.