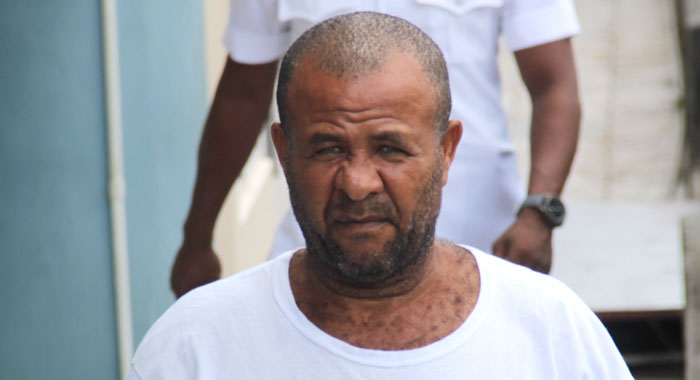 The Byera man charged in connection with the cutlass attack that left another village with his intestines exposed has been denied bail – again.

Lawrence Dabriel, 54, was denied bail on Tuesday when he appeared before the Serious Offences Court in Kingstown.

He was initially arraigned last Wednesday on a charge of wounding with intent, in connection with a chopping incident, one day earlier, which left fellow villager Michael “Mike” Woods, 55, with a portion of his intestines hanging out of his abdomen.

At the Serious Offences Court, Senior Prosecutor Adolphus Delplesche told the court that he was still objecting to bail.

Delplesche said that Woods was still in the Intensive Care Unit of the Georgetown hospital.

“He is not stable. He is not mobile. He has to be assisted and he is not fit to be released from the hospital,” the prosecutor said.

He said that while Woods has undergone surgery, doctors were still monitoring him because issues can still develop, noting that Woods was the victim of an alleged cutlass wound to the abdomen.

The senior prosecutor asked the court to remand Dabriel in custody then have the investigator update the court at the next bail review.

Chief Magistrate denied bail and ordered Dabriel to reappear before the court next Tuesday, Oct. 8, 2019.