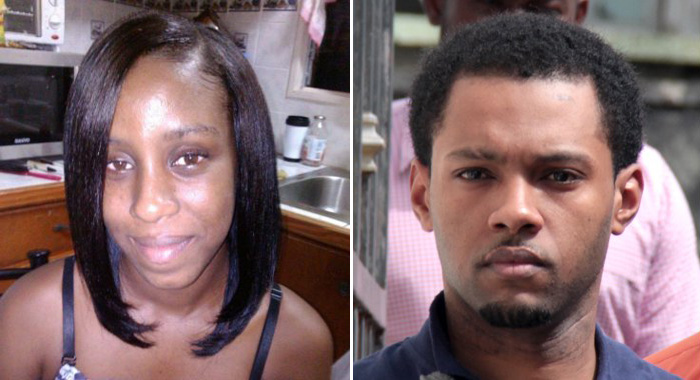 Mewanah Hadaway, left, did not testify in the proceedings against accused murderer, Veron Primus, nor in the abduction or sex offenses cases brought against him in relation to her.

Veron Primus, the accused murderer who was, on Wednesday, jailed for escaping prison, does not have to worry — for the time being — about the abduction and sex charges brought against him in 2016.

The charges against the 32-year-old Vermont man were withdrawn in 2017, Senior Prosecutor Adolphus Delplesche told the media on Wednesday.

Delplesche said the charges were withdrawn because the virtual complainant was not available to testify at the preliminary inquiry in 2017, having migrated.

Primus was charged with one count of kidnapping, two counts of rape and two counts of buggery after he allegedly kept fellow Vermont resident Mewannah Hadaway, then 24, against her will at a house in Vermont, from Jan. 1 to April 15, 2016.

Hadaway was reportedly rescued after Primus’ elderly aunt’s caregiver allegedly found a note in a refrigerator among her diabetes medications.

The note reportedly said that Hadaway was being held in a compartment on the ground floor of the two-storey house where Primus and his aunt lived in Vermont.

The abduction and sex charges cases were being heard at the Family Court, which is not open to the media.

The prosecutor said he understands that Hadaway was overseas at the time of the preliminary inquiry in 2017.

Hadaway had also refused to testify in the preliminary inquiry into Greaves’ murder.

iWitness News was reliability informed that she had told prosecutors that she would only testify if her housing was improved and she was given a job.

The Crown, however, pointed out to Hadaway that it would be unethical and illegal to do so, and dropped her from the witness list in the murder case, sources say.

In April 2016, police were investigating Primus’ alleged abduction of Hadaway when they cracked the Greaves murder case.

On Nov. 13, 2015, Greaves was found dead with stab wounds at her real estate business in Arnos Vale. Investigators have concluded that she died between Nov. 12 and 13.

In September 2017, the Serious Offences Court approved an application by the prosecution for Hadaway to testify remotely and in camera against Primus in the murder inquiry.

The approval came in light of a report from psychiatrist Karen Providence that Hadaway was suffering from post-traumatic stress disorder as a consequence of her alleged abduction.

At least one other witness in the proceedings had testified in camera.

However, when the hearing continued, Delplesche had told the court that the prosecution was closing its case.

The prosecutor, in keeping with his legal privileges, had not volunteered any explanation to the court, nor had he commented when Primus noted that Hadaway was not testifying as scheduled.

Chief Magistrate Rechanne Browne had gone on to commit Primus to stand trial in the High Court for Greaves’ murder and he had been remanded in prison until his trial.

Primus was being kept at Her Majesty’s Prison in Kingstown, from where he escaped overnight Monday.

After being charged with Greaves’ murder, Primus was indicted in New York for the 2006 murder of one of his friends, Chanel Petro-Nixon, 16, in Brooklyn, New York.

Primus spent about two decades in United States and was deported in 2015 after serving prison time for violating a court order.

On Wednesday, Primus registered his first criminal conviction in St. Vincent and the Grenadines when he was jailed for 16 months for escaping lawful custody.

Primus pleaded guilty to a charge that between Sept. 30 and Oct. 1, 2019, at Kingstown, while being held on remand at Her Majesty’s Prisons, he did escape such lawful custody.

Primus gave neither the court nor police any explanation about how or why he had escaped custody.

The accused murderer was accounted for at 3 p.m. Monday, when the prison was locked down for the night, and was found unaccounted for around 10 a.m. on Tuesday, according to the facts that the prosecution presented to the court.

He was accounted for at 11 p.m. Monday when the shift at the prison changed. The shift changed again at 7 a.m. Tuesday, the prosecutor told the court but gave no information about whether Primus was accounted for.

Around 2:30 p.m. Tuesday, Primus contacted Jomo Thomas, his court-appointed lawyer in the murder case, telling the lawyer to meet him at Grammar School Playing Field and escort him back into police custody.