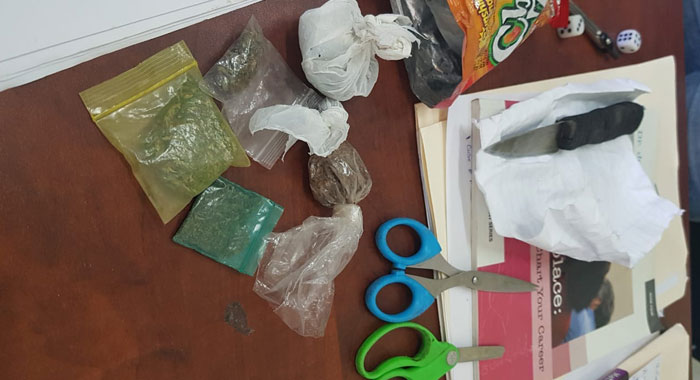 The drugs and other items confiscated from students at West St. George Secondary School last Friday.

One student who had just returned from suspension for smoking marijuana was, on Friday, suspended from West St. George Secondary School after he was found to be among five students on which police found drugs and weapons.

A source at the co-ed school told iWitness News that the Auxiliary Police officer who usually provides security at the school along with a member of the Rapid Response Unit, an armed, tactical unit of the police force, conducted the search of the student population.

The search netted portions of marijuana, two pairs of scissors, one knife, and a multi-purpose utility tool that also includes a knife.

The student who was suspended after the discovery of the illegal or prohibited items was just returning to school last Friday after suspension for smoking marijuana while in his uniform.

A source told iWitness News that the police found that student with two packages of marijuana and a pair of scissors in his possession.

The development comes at the beginning of a school year after the school celebrated an unprecedented feat by its students in the 2019 CSEC performance.

The school obtained a 78.24% pass rate in the May/June regional exams.

This percentage pass rate has ranked the 15-year-old school 8th among the secondary schools in St Vincent and the Grenadines, according to figures released by the Ministry of Education.

“Although it has been only 10 years since the West St George Secondary School started sending its students to sit CSEC, its results have placed it among the top 10 of the nation’s best performing schools. That is, the WSGSS has been ranked in the top ten for 50%, or half of the time! Certainly, this is no fluke, or mere coincidence,” the school said in a press release in August.

One reply on “Drugs, weapons confiscated at secondary school”