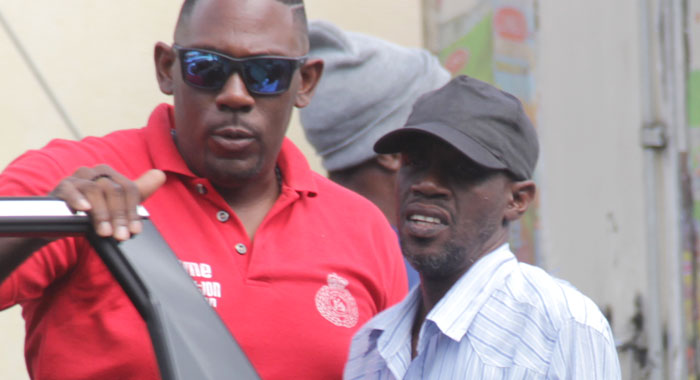 A Murray’s Village man with 12 years’ experience in the prison service was, on Friday, denied bail on two charges related to the escape, earlier this week, of accused murderer Veron Primus from Her Majesty’s Prisons in Kingstown.

Louie Cupid, 45, pleaded not guilty to a charge that between Sept. 29 and Oct. 2, 2019, at Her Majesty’s Prisons, in Kingstown, being employed in the Public Service, as a police officer, he abused the authority of his office by doing an arbitrary act prejudice to the rights of the Superintendent of Prisons, to wit, conspire to aid the escape of Veron Primus from lawful custody.

He entered the same plea on a charge that between Sept. 24 and Oct. 2, 2019 at Her Majesty’s Prisons in Kingstown, he agreed with Veron Primus that a course of conduct shall be pursued, which, if the agreement was carried out in accordance with his intention, would amount to the commission of the offence of escaping lawful custody by the parties to the agreement.

Counsel Grant Connell who appeared for Cupid at the Serious Offences Court told the court that Joseph Delves was also a lawyer for the accused man.

The investigations spread wide, Delplesche said, noting that one of the charges was conspiracy.

He asked the court for a little more time so that Richards and his team “can turn over every stone, every Ju-c cork, every nail that they may have to in these investigations.

“That is all I am asking for,” Delplesche told the court.

He said that the Crown would not object ad infinitum but was asking for an opportunity “to look for more, unhindered”.

Delplesche said that while Cupid has his constitutional rights, the state is also protected by the Constitution and due process must be allowed to take place.

The senior prosecutor said that if the application is granted, the investigators would report.

However, Connell said that Delplesche’s was a submission made on several occasions, which the court has entertained and most likely would entertain on that occasion.

The defence counsel, however, said that he must draw to the attention of the court that when someone is charged, it is understood that there is sufficient evidence to bring a charge before the court.

That person is innocent until proven guilty, Connell said, adding, “it is not the French law we are practicing”.

The defence lawyer said he did not know much about Ju-c cork and other things that investigators have to turn over.

“What I do know are the charges that are before this court,” he said, adding that they hinge on Primus’ escape from lawful custody.

Connell said that the institution in question is the prison, and that four officers were taken into custody, three released, and one charged.

“I can’t see, at this juncture, what more investigation the prosecution could possibly be taking about. That is a fishing expedition at best. We are here for bail,” Connell said.

He said that Cupid has sufficient ties to the jurisdiction, is a Vincentian who has been employed by the prison authorities for a significant period, and can supply a surety.

The lawyer also said that court could impose conditions of bail “that would shackle him so that he would not get involved in this great investigation”.

Connell submitted that the prosecution’s application for time and objecting to bail “is only a veneer.

“It is actually adding insult to injury… They have not told this honourable court any reason why this man would not turn up for his trial.”

The chief magistrate said she would review bail next Friday, Oct. 11.

This is the second time since 2016 that Cupid has been charged in connection with the execution of his duties.

On Nov. 3, 2016, Cupid appeared before the Serious Offences Court and pleaded not guilty to a charge that on Oct. 31, 2016 at Her Majesty’s Prisons in Kingstown, he brought or attempted to bring into Her Majesty’s Prison a prohibited item, to wit one Azumi cellular phone and its accessories comprising of a headphone, USB cord, adapter and one portable charger.

Cupid had been granted station bail before appearing in court and Senior Magistrate Rechanne Browne allowed the bail arrangement to continue.

The matter was withdrawn on Jan. 20, 2017, when Senior Prosecutor Adolphus Delplesche told the court that the Crown was not proceeding with the matter.

On Wednesday, the chief magistrate ordered him to serve a 16-month prison term for the jailbreak.

He had pleaded guilty to a charge that between Sept. 30 and Oct. 1, 2019, at Kingstown, while being held on remand at Her Majesty’s Prisons, he did escape such lawful custody.

Primus has also been indicted in New York in connection with the murder of 16-year-old Chanel Petro-Nixon.

U.S. authorities have made an extradition request for Primus but Kingstown says it will consider the request after exhausting the legal proceedings in St. Vincent and the Grenadines.