Canadian-Vincy among 3 on gun, ammo charges 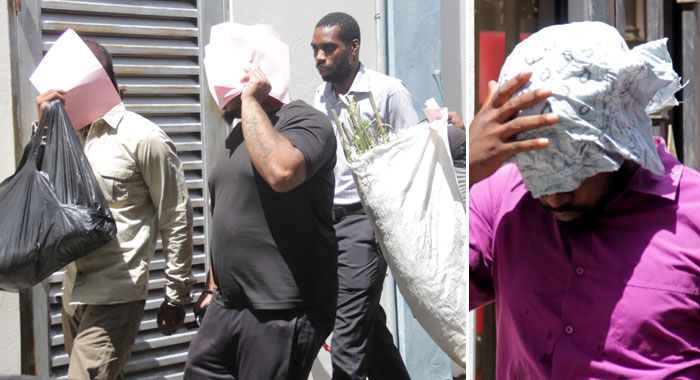 The accused men hide their faces as they are escorted to court on Thursday. (iWN photo)

Sadiffa Bakel, a Canadian man of Vincentian parentage, and two Vincentians have been granted bail on gun and ammunition charges.

Justin Inlaw, of New Montrose, Augustine Davis, of Peters Hope, and Bakel, whose local address is Fountain-Villa, are charged that on Oct. 2, at Rillan Hill, they had in their possession one 9mm Parabellum pistol, serial number unknown.
They were further charged that on the same date and place, they had in their possession four rounds of 9mm ammunition without a licence.

The men pleaded not guilty to the charges when they were arraigned before Chief magistrate Rechanne Browne at the Serious Offences Court in Kingstown on Thursday, Oct. 3.

Davis pleaded guilty to a charge that on the same date, also in Rillan Hill, he had in his possession 3,441 grammes (7.6 lbs) of cannabis without a licence.

Senior Prosecutor Adolphus Delplesche told the court that the drug charge arose out of the same facts and circumstances as the gun and ammunition charges.

He made an application for facts and sentencing to be adjourned, pending the outcome of the other two matters.

iWitness News understands that police have alleged that the men had the firearm and ammunition aboard a vehicle in Rillan Hill on Oct. 2.

Delplesche had initially objected to bail for Bakel, saying he is a non-national with no known ties to the jurisdiction.

He, however, withdrew the objection, telling the court that he had since been told that the man’s mother is Vincentian.

The chief magistrate granted each of the men bail in the sum of EC$20,000 with one surety, ordered them to surrender their travel documents and report to the police station in their district on Mondays between 6 a.m. and 6 p.m.

Browne also ordered that stop notices be placed at ports of entry and exit and that the men seek the permission of the court if they wish to travel.

Inlaw asked the court to be allowed to stand his own bail, saying that he had assets in the bail amount but no one in the country to act as a surety.

Delplesche, after discussion with the investigator, said that the prosecution would accept cash bail of EC$20,000 for Inlaw.

The accused man, however, said he did not have that amount in cash.

Inlaw was able to secure a surety the following day.