Use your phone to keep them honest — Exeter 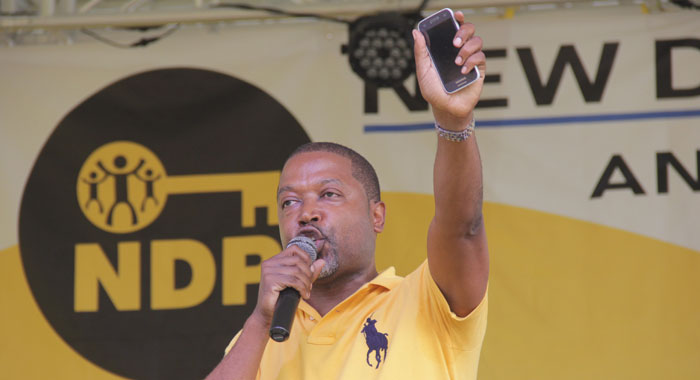 The New Democratic Party’s Ben Exeter holds up a cell phone at the party’s convention rally on Sept. 29. (iWN Photo)

Opposition politician Benjamin “Ben” Exeter is encouraging electors to use their mobile devices on election day to help to preserve the integrity of the polls.

“Central Leeward, the original ground zero. Remember what happened there December 9th 2015 when we beat the heck out of them and the next day, we caught them stealing from the ballot boxes?” Exeter told the New Democratic Party’s 41st convention rally in Arnos Vale on Sept. 29.

Exeter, who was the NDP’s candidate for Central Leeward has filed a petition challenging the announced results of the poll in that constituency.

In March after a full trial, the High Court dismissed both petitions for lack of evidence, but the NDP had filed appeals, the hearing of which is pending.

Exeter, however, told party supporters that before they can use their devices on election day, they have to register to vote and make sure that they, their children and their neighbour turn out to vote.

“Because, if you do not do that, we would not make this man the next prime minister of St. Vincent and the Grenadines,” he said, referring to NDP President and Leader of the Opposition, Godwin Friday.

“You have to make sure you come out and vote. West St. George make sure that you do the same thing because we know in Central Leeward what they did the last time and we are gonna make sure it doesn’t happen again,” he said, referring to the constituency that was hosting the convention.

“They did not win the last election and we had the petitions going and they brought in all kinds of stuff trying to stop us from seeing what’s in those ballot boxes. But we know what happened. They tell us to move on, forget about that. Somebody robbed your yesterday, are you going to forget about them tomorrow? No! We are going to make sure we keep them honest. We are going to keep this government honest because you have been in the wilderness for far too long,” Exeter said.

“Your children need clothing, shoes, to send them to school. You know how difficult it is to get a job because a job doesn’t’ exist. It’s not there. Your only hope folks, your only hope for tomorrow is the team behind me that you see right here,” he said, referring to the Member of Parliament, candidate and caretakers on stage at the NDP event.

“This is the hope for the future, the New Democratic Party,” Exeter said.

He implored everyone to come out in their numbers and vote “because they will try and steal it again.

“But if enough of you come out in your numbers, they can’t steal enough from us,” Exeter said.

General elections are constitutionally due by March 2021 but are expected by the end of 2020.

3 replies on “Use your phone to keep them honest — Exeter”