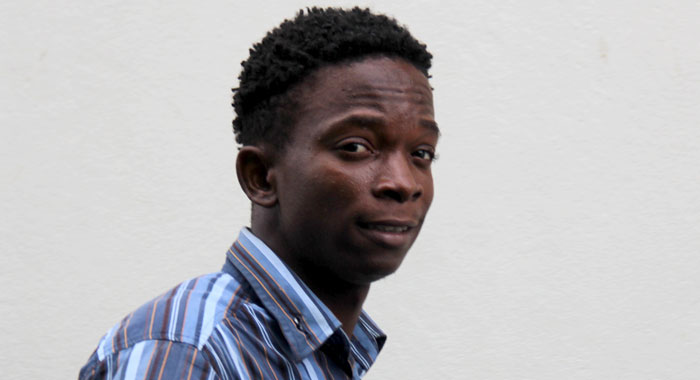 Akeemo George on his way to prison after his court appearance. (iWN photo)

A Bequia man who said he tried to evade a number of court orders by hiding under a bed saw the law catching up with him after finding himself at the business end of the homeowner’s gun.

The man, Akeemo George, 26, appeared, on Oct. 8 at that Serious Offences Court where he pleaded guilty to a charge that he entered the dwelling house of George Bunyan, of Belmont, Bequia, as a trespasser with the intent to commit an offence, to wit, theft.

The six-month sentence that the court handed down for that offence, however, was just one of four that came into effect that day.

The facts of the case are that George had been working with Bunyan at his home on afternoons for the previous month.

However, on the day in question, the homeowner was in his garden around 11 a.m. when he began feeling thirsty.

Bunyan went inside the house, where he heard a sound coming from an upstairs bedroom.

The homeowner met George leaving one of the bedrooms and questioned him regarding why he was in the house.

George told Bunyan, “I am hiding from the police. Can you put me up?”

Bunyan questioned George as to why he was hiding from the police and they both got into an argument, during which George said, “Blood in season”

George also said he had been in the house since 8 a.m. and had been hiding under Bunyan’s son’s bed.

Bunyan, who is the holder of a licenced firearm drew his weapon and contacted the police.

Police Constable Parris responded and questioned George as to what he was doing at the man’s house.

George then said he wanted a place to “rest up” hence his decision to go to the complainant’s home.

Asked what he had to say for himself, George told the court everything said in the fact was true.

“I think you know why you were running from the police. You have some obligations to the court. You haven’t met them, right?” Browne asked George, who said, “No.”

“And it’s more than one court; several courts,” the chief magistrate further said.

In handing down her sentence, the chief magistrate noted that George had three previous convictions of a similar nature, two of which were recent.

She sentenced him to six months in prisons for the offence.

However, George was been bonded on May 5 for one year or six months in jail.

His conviction activated that sentence.

Also, on May 5, George was ordered to pay EC$2,000 in compensation or spend three months in jail. He had failed to so, therefore that sentence also came into effect.

That sum was not paid, resulting in a four-month prison sentence.

With the sentences running consecutively, George will spend 19 months in prison.

One reply on “Man runs from court orders into gun nozzle”