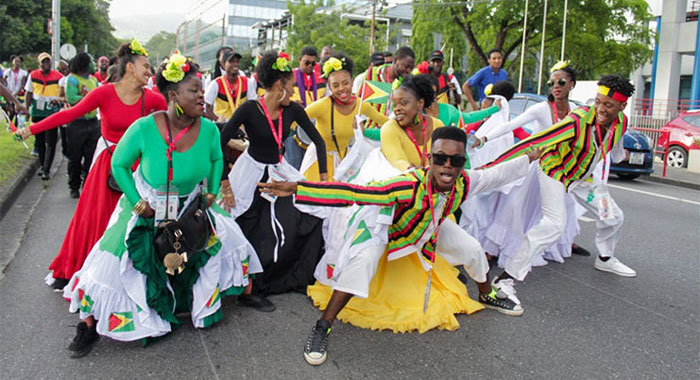 NIAMEY, Niger (CMC) — As the 79-member African, Caribbean and Pacific (ACP) countries negotiate a post-2020 relationship with the European Union, culture is being presented as an untapped sector that can contribute to the further development of the region.

“When you look at the Caribbean, in particular, Caribbean music has had a lot of influence on African music, Caribbean intellectuals are well-known throughout Africa an even outside of Africa,” says Leonard-Emile Ognimba, the ACP’s Assistant Secretary General.

Two years ago, ACP culture ministers through the “Brussels Declaration”, recognised the central role of culture as a driver of economic growth and sustainable human development.

The issue is being further discussed at this week’s fifth meeting of ACP ministers of culture, taking place here  within the special context of the negotiations for a new Cotonou Agreement, the accord that links the ACP and the EU countries. The existing agreement expires in 2020.

The four-day meeting, which ends on Sunday, is taking place under the theme “Strengthening and Diversifying Partnerships for ACP Cultures”.

Ognimba tells the Caribbean Media Corporation (CMC) that the ACP has highlighted the role of culture in endogenous and sustainable development and is insisting that a strong cultural dimension be included in the cooperation strategies and policies.

He says culture is a cross-cutting issue which encompasses new areas, including development issues.

“It is a matter of particular interest to the ACP group of states, which have a vision; that, is poverty reduction and therefore this includes development.”

The senior ACP official says he is speaking about the issue from a development standpoint, noting that in Brussels, ACP ministers of culture, “apart from the artistic aspects of culture have made particular stress on development.

“This, because culture is seen as an essential force for economic growth in our countries.  It is an essential factor in job creation, particularly for young people and women.

“In a nutshell culture is an essential and major area of the partnership of yourself and the European Union. And it is on that basis, in fact, that together with the EU we have come up with a new ACP-EU programme on culture,” Ognimba tells CMC.

But as the ACP focuses on the economic value to be garnered from cultural expressions, the 15-member Caribbean Community (CARICOM) is of the opinion that the Caribbean has a comparative advantage in culture and creativity.

Programme Manager for Culture and Community Development at the Guyana-based CARICOM Secretariat, Hilary Brown, says the Caribbean “has produced so much and has made its mark on the global arena in a way that is way above our size.

“So we believe that culture and creativity is a very important area for us to advance,” says Brown who is attending the meeting in this West African capital.

She says CARICOM also focuses on culture as a means of economic advancement and is using its annual festival, the Caribbean Festival of Arts (CARIFESTA), as a platform to do that.

At the national level, governments have been adopting policies in an attempt to maximise the economic potential of cultural expression.

Permanent Secretary in the Ministry of Tourism, Information and Broadcasting, Culture and Creative Industries in St. Lucia, Donalyn Vittet, says that while her island’s tourism sector has been “growing by leaps and bound”, the question remains regarding positioning culture and the creative industries “to be able to actualise the policy decisions and objection of tourism as an economic driver”.

The senior public servant tells CMC that she sees the conference as an opportunity for her to able to take home the guiding principles used under the ACP for the development of culture and creative industries and see how they can be used to enhance St. Lucia’s policy decisions.

The meeting comes at a time when the European Union has allocated 40 million euros for the development of cultural industries in the ACP countries.

Brown tells CMC that CARICOM is particularly interested in taking a regional approach regarding the funding, adding “we feel that there needs to be more equity in the way that resources are distributed and accessed by the three [ACP] regions and so we are really are very keen on advancing available modality for providing resources regionally to the three ACP region”.

Vittet echoed similar views, saying it is important for Caribbean countries to have a voice in talks like the ones taking place here.

“The Caribbean should have a stronger focus in terms of the equitable distribution of those funds. And so while we have been by-passed as being the smaller contingent within the ACP countries, our voice has not been diminished. And so this forum provides an opportunity for the Caribbean to speak and then for the Caribbean to act,” she tells CMC.

Vittet says that St. Lucia is also focusing on updating its culture policy, which dates back to 2005 and Castries is approaching the review “in a way that we can encapsulate some of the new technologies, new ideas and the development of our sector”.

The hope is not just to get artisans on the national stage but to place them on the map, she explains, adding that success in this regard also puts St. Lucia on the map and help the destination with is branding and marketing. Vittet, however, points out that the idea is “not to water down our culture to meet tourism”.

On the contrary, she says, is it keeping “the essence, the cultural values and our heritage core and keep it pure in a way that we can still package it and release in a way that is part of our tourism product”.

Another Caribbean technocrat at the meeting is Jamaica’s director, Cultural Policy and Monitoring, Ministry of Culture, Gender, Entertainment and Sport, Marisa Benain, who says that while she does not see culture as a “magic bullet” for the Caribbean, “it is as close to that in terms of development.

“I think it should really be placed at the centre or at the core of strategic development, economic development for the region.

“If you look at our resources, the culture of the Caribbean people is magical and it is globally accepted and loved and I think we have to use the culture as a centre piece for the advancement of the economy and the overall development,” she tells CMC.

Benain says she is pleased to see more countries are recognising the importance of culture and its potential to contribute to national development.

“I am pleased to see more counties are developing and crafting national culture policy. So it seems that we are heading in the right direction. I hope that the momentum is sustained and that it doesn’t change what we already know is possible,” she added.

This week’s meetings provided for participants outside of the state machinery.

She tells CMC that she is exploring opportunities for artistic exchange between the Caribbean and the other ACP blocs and has had some conversations in that regard.

She is especially encouraged by her discussions with some visual artists from the Pacific, noting the common issue of the impact of climate change on Pacific and Caribbean countries — small island developing states.

“We are looking  at how we can use art almost at activism — so ‘artivism’, if you  will — to bring some kind of focus to the issue  of climate change the and sea level sand stuff that we need to really be concerned about,’ Chung says, adding  that she sees the arts as a real lever for national development.

“I think it is a very, very untapped resource. A small island like Jamaica has a disproportionately large culture; we are a cultural superpower without even trying. Everybody knows about reggae music, but how are we using that to advance our people?

“I don’t think we are really using it as best as we could. So, definitely, the cultural industries and the creative industries is a lever that can bring our countries’ national development forward, if we focus on it and use it in that way,” Chung tells CMC.