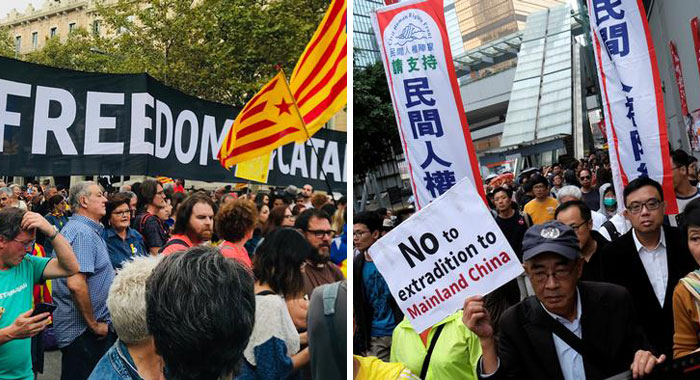 If you have been paying attention to the news, you would have noticed that two countries have been racked with demonstrations; the people are angry and are demanding change. We refer to Catalonia, Spain; and Hong Kong, a department of China.

Of vital importance for our purposes though, is the manner in which the media portrays these struggles. Protestors in Hong Kong are literally celebrated as freedom fighters battling against the dictates of a repressive central government that sits in Beijing, China; while the protestors in that section of Spain known as Catalonia, are depicted as an angry mob making unreasonable demands on the Spanish government. Some media have condemned the actions of the Catalonian protestors as being violent and criminal.

A history helps. Catalonia is one of Spain’s wealthiest and most productive regions, and has a distinct history dating back almost 1,000 years.

Before the Spanish Civil War (1936 to 1939), Catalonia enjoyed broad autonomy, but that was suppressed under General Franco. When Franco died in 1975, the region was granted autonomy again under the 1978 constitution, and prospered as part of the new, democratic Spain.

A 2006 statute granted even greater powers, boosting Catalonia’s financial clout, and describing it as a “nation”; but Spain’s Constitutional Court reversed much of this in 2010.

The 2008 financial crash, and Spanish public spending cuts, fueled local resentment and separatism.  There is a widespread feeling that the central government takes much more in taxes than it gives back.  Following a symbolic referendum in November 2014, which was outlawed by Spain, separatists won the 2015 regional election.

Catalonia’s pro-independence leaders then went ahead with a full referendum on  Oct. 1 2017. They declared independence on Oct. 27, 2017.  However, Spain’s constitutional court declared the move illegal and jailed the leaders.  Last Monday, the Spanish Supreme Court found the 12 leading politicians from Catalonia guilty of sedition and sentenced them to long prison terms.

After the ruling, a new arrest warrant was issued for former Catalan President Carles Puigdemont, who is living in Belgium. Puigdemont said that Catalonians were victims of a “strategy of repression and revenge”. But Spain’s Prime Minister Pedro Sanchez insisted the leaders had been jailed for criminal conduct.

Puigdemont described the sentences handed to separatist leaders, which total more than 100 years, as “an atrocity”.

“Now more than ever … it is time to react like never before. For the future of our sons and daughters. For democracy. For Europe. For Catalonia,” he said.

Amazingly, the established media runs with the view pushed by the Spanish government. There is no sympathetic coverage for the efforts and bravery of the people, or a condemnation of the trial and jailing of the political leadership from Catalonia.

Not so when it comes to coverage of developments in Hong Kong. There is much more sympathy and understanding for the Hong Kong protesters. The demonstrations, which started in June, were against proposals to allow extradition to mainland China.  Critics feared the new requirement could undermine the city’s judicial independence and endanger opponents of the central government.

Until 1997, Hong Kong was a British colony, but since returning to Chinese rule, it has enjoyed more autonomy than the mainland, and its people more rights. The arrangement is known as “one country, two systems”.

Hong Kong’s leader, Carrie Lam, described by the western media as a Chinese puppet, suspended the extradition bill, but demonstrations have continued with demands for full democracy and an inquiry into police actions.

Protesters have expressed fear the bill could be revived, so demonstrations continued, calling for it to be withdrawn completely. By August, clashes between police and protesters had become more frequent and violent. Finally, in September, the bill was withdrawn, but protesters have said that this was “too little, too late”.

Some protesters have adopted the motto: “Five demands, not one less!” These are:

* For the protests not to be characterised as a “riot”. Imagine that demand!

Some also called for the resignation of Carrie Lam. Protests supporting the Hong Kong movement have spread across borders, with rallies taking place in the UK, France, US, Canada and Australia.

In many cases, people supporting the demonstrators were confronted by pro-Beijing rallies. Chinese president Xi Jinping has warned against separatism, saying any attempt to divide China would end in “bodies smashed and bones ground to powder!”

Hong Kong has its own judiciary and a separate legal system from Mainland China. Those rights include freedom of assembly and freedom of speech. But those freedoms — the Basic Law — expire in 2047, and it is not clear what Hong Kong’s status will then be.

What is clear is that the future of the people of Catalonia and Hong Kong remain uncertain. Many people may be killed or imprisoned before all of these struggles for freedom and democracy are finally resolved.

Sadly, the media rarely assists with our understanding of these issues and problems. It can safely be said that, at times, there is a distinct attempt to confuse the situation, depending on what’s at stake. Some people’s freedom fighters are labeled criminals, while criminals are sometimes given a pass because it serves the interest of the powers that be to celebrate some and demonize others.

Perhaps the best example of this double standard is the current fight between the Palestinian people and the murderous Israeli regime, where even children are jailed, shot, or killed, without even a whisper from Western governments and media.

If that’s too far-fetched, imagine what the media would say, and western governments would threaten to do if a government, not to their liking, was to beat protestors and jail opponents as the Spanish government is currently doing.

6 replies on “Countries in contrast”