The effects of sargassum, climate change on fisheries 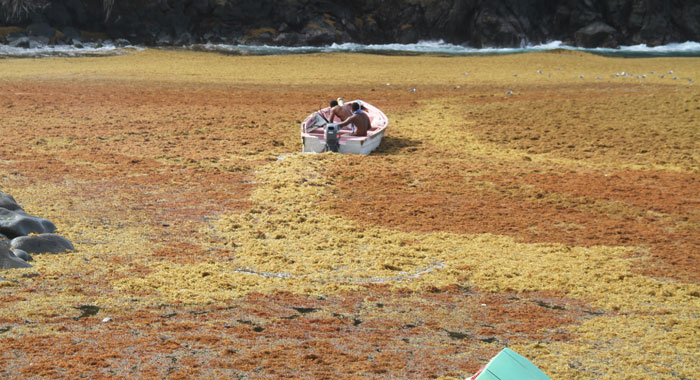 A boat throttles through thick sargassum in Owia in July 2018. (iWN photo)

Climate change and the massive invasion of sargassum seaweeds are “villains” to the fisheries sector. They partner like Two-Face and The Riddler in the movie “Batman Forever”, with a mission to destroy. Climate change refers to significant changes in global temperature, precipitation, wind patterns, and other measures of climate that occur over several decades or longer.

Climate change is accelerated when there is an increase of greenhouse gases in the atmosphere — such as carbon dioxide, nitrous oxide, methane, sulphur dioxide — that warm the earth. The ocean absorbs more than 90% of the heat trapped on earth from increased green house gases, and a study published in January 2019 in the journal science, reports that the oceans are warming 40% faster on average than the UN predicted five years earlier, and ocean temperatures continue to break records year after year.

Warmer waters can make some fisheries smaller by putting metabolic stress on fish, making it harder for them to reproduce or find food. It can also cause zooplankton, essential fish food, to decline. It also threatens to cause mass migration of marine species in search of the right conditions for feeding and spawning. This would have a negative impact on fisher folks because it would cost them more gasoline to go further out in the sea.

The largest reef in the world, the Great Barrier Reef, is experiencing coral bleaching. Coral Bleaching refers to the process in which a coral colony loses zooxanthellae, the microscopic algae, when under some form of environmental stress. As zooxanthellae is expelled, the coral colony appears white, hence the term “bleached”. A CNN news article on Aug. 8, 2018, states that in 2016 and 2017, marine heat waves caused by climate change resulted in mass bleaching which killed about half of the Great Barrier Reef. Ocean acidification also occurs as a result of an increase in carbon dioxide in the ocean. The more acidic the ocean is, it is harmful to sea creatures like oysters, corals, plankton, and shellfish that grow hard shells made of a chalky mineral called calcium carbonate. If ocean water becomes too acidic, it can begin dissolving those shells.

Here are some solutions for climate change:

Methane absorbs the sun’s heat, warming the atmosphere hence the reason it is considered a green house gas. Methane is particularly problematic as its impact is 34 times greater than carbon dioxide over a 100-year period.

Sargassum is a genus of large brown seaweed (a type of algae) that floats in the ocean and never attaches to the sea floor. Sargassum is invading a lot of beaches in the Caribbean and it is causing a crisis on the fisheries sector. Scientists have some theories about the invasion of the sargassum seaweeds in the Caribbean. These include the rise of water temperature and the change of sea currents due to climate change. Also, nutrients from agricultural fertilisers and wastewater from cities that end up in the sea could also make the algae flourish.

An invasion of sargassum smother sea grasses and coral reefs, it tangles up fishermen motors, engines, nets, and their lines. Nesting sites for turtles can be blocked. In 2015, over 40 sea turtles died in Barbados after they became “entangled” in large mats of seaweeds.

Here are some solutions for sargassum:

Don’t you think in the Caribbean, more persons should get on board and turn all these seaweed into something profitable, instead of having it destroying all these pristine beaches?

4 replies on “The effects of sargassum, climate change on fisheries”