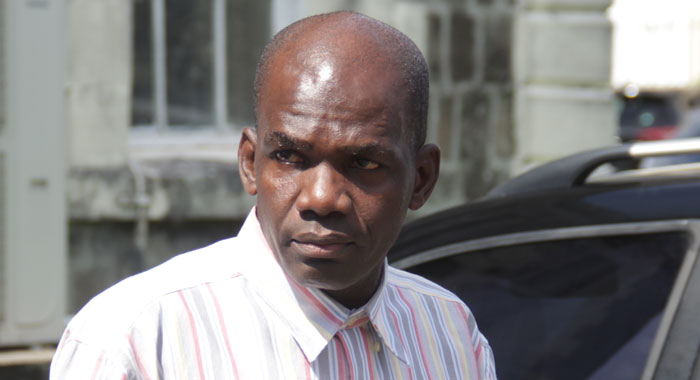 Medford Cain returns to prison after his sentencing on Friday. (iWN photo)

A then-49-year-old married man who, in 2015, caused the death of his 18-year-old lover in a post-lovemaking fight was, on Friday, ordered to spend a further four years in prison.

Medford Cain, of Lowmans Bay, was sentenced to a term of eight years and seven months in jail, having benefitted from the one-third discount for an early guilty plea.

However, having spent four years, three months and 18 days on remand, Cain will have to serve an additional four years before being released.

Cain had initially been charged with murder in connection with the death of Katisha Bess, of Great House, Lowmans Leeward, but pleaded guilty to manslaughter, a lesser charge.

The facts of the case are that Bess left her home on June 29, 2015.  Her last known communication was about 3:20 p.m. that day, when she telephoned her sister-in-law using Cain’s telephone.

In the call, Bess told her sister-in-law that she was at Byera on her way to Kingstown and that she was in Cain’s company.

An autopsy concluded that she died of blunt force trauma to the head.

The police investigation led to Cain, who told detectives that on June 29, 2015, he and Bess went to Canash Beach, where they had sex in his car.

After their lovemaking, Bess asked Cain for $700 to buy a mobile phone and he told her he did not have any money.

He further told investigators that an argument ensued and he tried to stop Bess from walking away and she slapped him twice.

Cain then struck her with his hand and she collapsed and did not move thereafter.

The defendant told police that he then became confused but tried to assist the woman.

He then placed her in his vehicle, took her to the Kings Hill forest and left her there.

Cain further cooperated with police by taking them to the relevant places related to the incident.

In handing down the sentence, Justice Brian Cottle noted that the maximum penalty for manslaughter is life imprisonment, a notional sentence of 30 years.

He added that this, however, is reserved for the worst cases, adding that the extant case was not one of them.

He reiterated the aims of sentencing, namely retribution, deterrence, prevention, and rehabilitation.

The judge further pointed out that in arriving at a sentence, the court begins with a starting point then adjusts upward or downward for the aggravating or mitigating factors of the offence and the personal characteristics of the offender and analysing them for aggravating and mitigating features.

He further indicated that a convicted person is given a discount of up to one-third on their sentence to reflect a guilty plea at the earliest opportunity.

Any time spent on remand is then deducted from the sentence and, in the case of multiple offences, the court would decide whether the sentences should be concurrent or consecutive, and would also consider the totality principle.

Justice Cottle said that 15 years is the accepted starting point for manslaughter.

He noted that Cain is now 53 years old and the father of three adult children.

He said the court understands that Cain’s wife has forgiven his infidelity.

Before the offence, Cain was employed at a joiner at Finishing and Furnishing and since being jailed, has been teaching other persons his skill.

He did not attain a secondary education but attended church frequently and had a clean record and has expressed remorse for his crime, Justice Cottle pointed out.

The judge said that while the court looks favourably on the man’s previously clean record, the offence was aggravating in that Cain had taken steps to conceal Bess’ body.

“But in my view, this is counterbalanced by the cooperation he has displayed when dealing with the investigating authorities,” the judge said.

He said he also considered the remorse Cain expressed and the court would reduce the starting figure from 15 to 13 years.

In her submission to the court, Cain’s lawyer, Kay Bacchus-Baptiste said her client was before the court as a result of “a very, very unfortunate incident”.

She said Cain is the father of two women, ages 30 and 29 and a 25-year-old son and that he had his wife has a good relationship.

Bacchus-Baptiste said she thinks her client’s wife has forgiven him “for the fact that he strayed” and visits him weekly in prison.

Cain’s wife was also in court for his sentencing.

The lawyer said her client has expressed extreme remorse for his action and though he was not forthright at the beginning, he cooperated with the police, who might not have been able to get certain evidence had it not been for his cooperation.

She said it was clear that there was no premeditation and she suggested a sentence of no more than seven years, given the guidance of the court of appeal on such matters.

Rose-Ann Richardson appeared for the Crown in the matter.

As he was being escorted back to prison, iWitness News asked Cain if he was satisfied with his sentence. He responded, “Yeah. Yeah. Yeah.”