Generation Next gives out 27 college bursaries 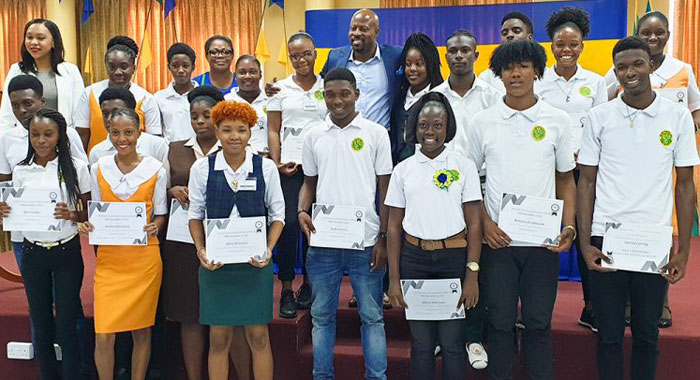 The programme, which is in its sixth year, has assisted over 100 students with bursaries to attend the St. Vincent and the Grenadines Community College.

Delivering remarks at the award ceremony in Kingstown, Parliamentary Secretary in the Ministry of Education, Senator Deborah Charles, lauded the efforts of Generation Next in providing the much-needed assistance to the recipients of the programme.

She encouraged the recipients to build on the opportunities provided through the advancements taking place in the education sector and also the support given to them through Generation Next’s Access to College Education Programme.

“You have been empowered, [Generation Next] is giving you the necessary support to build on your education and in doing that you need to be dedicated to the task at hand … nobody is able to take your knowledge that you have acquired, the only person who can stop you from accomplishing your dream is you,” Charles said.

The recipients also heard remarks from founder of Generation Next, Senator Carlos James who noted that this year’s award ceremony was taking place in the month of October as St. Vincent and the Grenadines celebrates 40 years of independence from Britain.

James said the nation’s greatest accomplishment in the last 40 years has been the advancement of its human resource capital — the poor and working class who have benefited significantly from this country’s advancements in education.

“In 1979 we attained Independence from Colonial Britain with a population of just under 100 thousand; we inherited only two major secondary education institutions to accommodate a growing youth population, which by 1980 represented more than half of the country’s total population. Our youth population stood at 55, 515 according to our 1980 Census,” James said.

The government senator stated that since the period of independence, SVG has seen significant transformation in education including the birth of the education revolution and universal access to primary and secondary education.

“Take for instance over the intercensal period, enrolment at the St. Vincent and the Grenadines Community College and Universities increased by 112.5% and 111.0%, respectively, indicating that there is a significant thrust in education at higher levels,” James said.

He told the gathering that the Access to College Education Programme has complemented the advancements in education through its provision of bursaries to children from vulnerable communities across St. Vincent and the Grenadines.

“Since the inception of this programme, some six years ago, Generation Next has provided over 100 bursaries to students and I want to thank the donors who continue to support this worthwhile initiative. There are recipients who have since left college and matriculated to university, some have gone on to various professional jobs.  It is indicative that education is a key factor in social transformation,” he said.

James further noted that while SVG celebrates its 40th anniversary of Independence with a focus on renewal, there are some aspects of the education sector which we must place a greater focus.

“One of our key development objectives is to create a competitive labour force and we must have an effective education system that focuses on bridging the digital divide, vocational training for at risk youth and more support for rural institutions and programmes. Our social development planners must take note.”

The Generation Next’s Access to College Education Programme is this country’s largest non-profit bursary programme.  Over 90% of the applicants are from single parent or unemployed households; 50% of this year’s applicants are attending the Division of Technical and Vocational Education while over 30% attend the  Division of Arts, Sciences and General Studies.