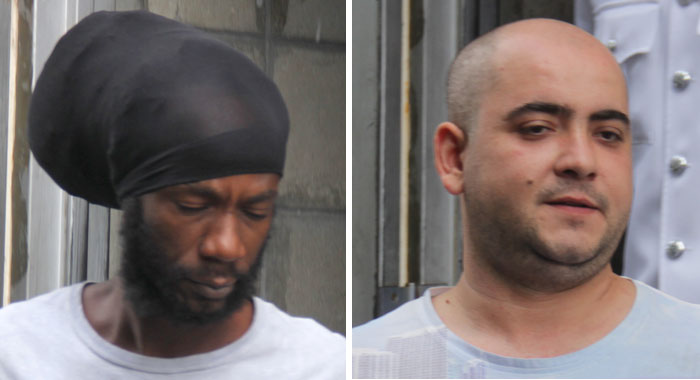 Two men, a Bulgarian and a Jamaican, were, on Thursday, each ordered to pay the court EC$10,000 forthwith or spend two months in jail after pleading guilty to charges relating to the scamming of ATM users in St. Vincent.

The Jamaican, Christopher Cole, 34, who has been living in St. Martin since 2008, and Bulgarian Mirolav Stanoev, 31, pleaded guilty to charges that on Oct. 23, when not at their place of abode, they had with them two sets of skimming devices, one Acer laptop, one Seagate external hard drive and one 16GB micro SD card for use in the course of theft.

They further pleaded guilty to a charge of conspiracy to commit theft when they appeared before Chief Magistrate Rechanne Browne at the Serious Offences Court in Kingstown on Thursday.

The facts are that the men arrived in St. Vincent, via airplane, on Oct. 21 and were scheduled to leave on Oct. 27.

They brought with them the items mentioned in the charge, which are designed to capture video footage of financial institutions’ ATM customers’ PIN number and debit card information.

The withdrawal could be done in SVG or at any ATM overseas.

On Oct. 23, about 8:50 a.m., personnel from Bank of St. Vincent and the Grenadines Reigate Branch conducted routine checks of their ATM s.

During the checks, a skimming device was found affixed to one of the ATMs.

The device was removed and the CCTV footage was reviewed, showing the men affixing the device to the ATM machine about 8:30 a.m. that day.

The bank contacted the Major Crime Unit (MCU), which launched an investigation.

Cole went back to the ATM machine about 12:30 p.m. that day with a checking card to make sure the skimming device was working as intended.

MCU detectives apprehended him and the card was taken as an exhibit.

Cole took the police to the Chamber of Industry Carpark, where Stanoev was met in a parked car.

He was using the Acer laptop at the time of his arrest and a search of the car turned up another skimming device, along with an external hard drive and a micro SD card.

A search was executed at their apartment in Villa but no other skimming device was found.

Police conducted electronic interviews with the men and they admitted to the offences.

Detective Alex Corporal Primus of the MCU, who led the investigation, told the court that the skimming device has a camera that records ATM users’ card numbers.

Once the device is removed, it can be connected to a computer, which displays the information, the detective said.

He indicated that one of the skimming devices can be inserted into the ATM, from where it downloads the information on the magnetic chips on the ATM cards.

Low on the totem pole

In mitigation, the men’s lawyer, Israel Bruce noted the seriousness of the charge.

“It is a very serious matter and in as much as I have been secured to provide legal representation for both Mr. Cole and Mr. Stanoev, I also recognise that I have a national responsibility to St. Vincent and the Grenadines,” the lawyer said.

Bruce said that in his engagement with his clients, he couldn’t help but express to them how poor a decision they had made.

He noted that he is bound by certain privileges; but that he could not say them to the court without violating lawyer-client privilege and that it is “abundantly clear to me that the men in the box right now… appear to be rather low, almost at ground level, with regards to the totem pole of the actors”.

Bruce said that they men were in court because they had made several wrong choices, they first being to come to SVG to do what they came to do.

He said his clients recognise that they acted foolishly.

The lawyer said that from the get go, Cole started to cooperate with the police, taking them to Stanoev, adding that this was an admission that they were doing something wrong.

He noted that the men admitted their wrong to police and also pleaded guilty at the first opportunity, thereby not wasting the court’s time.

The lawyer, therefore, asked the court to grant the men the one-third maximum discount for an early guilty plea.

Bruce said that the men had come to St. Vincent for money and that the court should make them pay then leave and be treated under the immigration provisions as undesirables.

The lawyer, again citing that he is Vincentian, first and foremost, said he would rather not have any of the men sitting next to any Vincentian prisoner.

He said he proposed that to avoid the transfer of knowledge, adding that if the country finds itself in such a situation it would not be able to deport the Vincentians.

“I see no need for us to feed them for any period of time … and I see no need to allow them to transfer any skill or knowledge of this unworthy craft to any possible exiting recipient at Her Majesty’s Prisons, hence my recommendation on sentencing.”

Any choir member could become pope

In his submission on sentencing, Delplesche said that while he had heard the issue about the transfer of knowledge, in this knowledge-based world, knowledge could be transferred from anywhere.

He said the offences are very serious and while Bruce said they might be at the lower end of the totem pole, they are on the pole.

“And one famous speech I like to repeat is that once you are singing in the choir, you can become pope,” Delplesche said.

“Once you are on the pole, you can become chief actor,” the senior prosecutor further stated.

He said the offences are highly sophisticated, requiring a lot of technical skill.

Delplesche asked the court to imagine what would have happened had the men succeeded.

“Can you imagine if a man from Bulgaria came to St. Vincent and had gotten through with this scam, what would have happened to our financial institutions?” Delplesche said.

He questioned whether the men had money to pay, asked rhetorically what should the court do with such men.

“Yes, we have to send a message but we also have to protect society. And that is the direction I am recommending the court to take. Yes, the message must go out but we also must protect our internal home affairs here as it relates to these types of criminals.”

He said he does not want them contaminating the system but they must pay for their crime.

Delplesche also recommended a removal order for the men on completion of their sentences.

Where did they meet?

The chief magistrate said her question was how the men met up.

Corporal Primus said they both left St. Martin together.

Browne said that wherever that meeting happened, there could be many more taking place.

She said the matters are serious and the consequences that can stem from them are huge.

Browne said it is difficult for the court to arrive an appropriate sentence to reflect the seriousness of the offences and the consequences that could have stemmed from them.

She said that sometimes one needs some time to sleep on these types of sentences, even as the court might be mindful of further contamination of other persons.

The chief magistrate stood the matter down for an hour while she considered her sentence, in chambers.

In handing down her sentence, the chief magistrate commended the detective for his investigation and thereby preventing people in SVG from suffering financial turmoil.

She also commended the bank for checking their machine and the overhauling to ensure that those things can be intercepted early.

Browne said that after consulting the sentencing guidelines, the court had decided to fine each of the men EC$5,000 for the being equipped to steal charge, with a prison term of two months in default.

They were each also fined EC$5,000 for the conspiracy charge or one month in prison.

The court also ordered that the men be removed from St. Vincent and the Grenadines on completion of their sentences and that their equipment be confiscated.

They men had not paid the fine by the time the court was adjourned for the day and police led them away, handcuffed to each other.