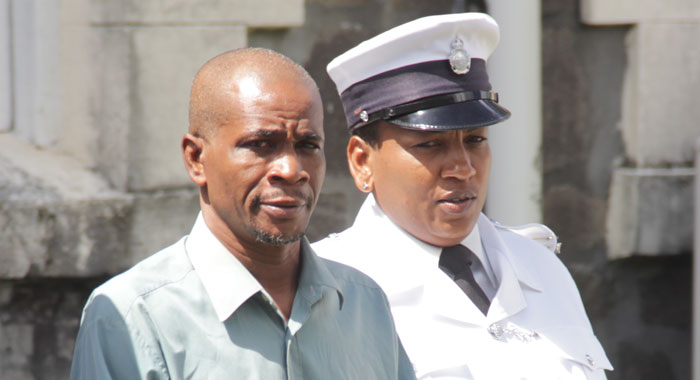 Ernie Jackson is escorted to prison to serve his 18.5-year sentence. (iWN photo)

A Campden Park man has been jailed after a DNA test confirmed that he is the father of a child whose mother he had denied raping six years ago, when she was 15 years old.

After a retrial, a jury found Erney Jackson guilty of the crime and Justice Brian Cottle jailed him for 18.5 years at the High Court in Kingstown on Tuesday.

During his first trial, which ended with a hung jury, Jackson had denied ever having sex with the 15-year-old girl who went on to give birth.

At the time of the first trial, a paternity test concluded that there was a 66.6% chance that Jackson was the child’s father.

However, at the retrial, the man agreed to a DNA test, the result of which removed all doubts about paternity.

After a full trial, he was convicted of two counts of rape.

First in the facts of the case was that the virtual complainant was a15-year-old school girl who had come to St. Vincent from the Grenadines to attend school.

She and her siblings were sleeping in a bedroom in a house to which Jackson had access.

On Aug. 5, 2012, Jackson entered the children’s bedroom and raped the 15-year-old girl even as her siblings were lying on the same bed.

The complainant told the court, that at the time of the ordeal, she was not only a young child but also a child of small stature and had breathing difficulties.

She further testified that Jackson’s body weight was enough to render her unable to struggle with him.

Some months later, the child’s mother noticed changes in her physique and had a pregnancy test performed, which confirmed her worst fears.

In handing down his sentence, Justice Cottle noted that there are guidelines that the court must follow for sentencing persons convicted of sexual offences.

He said a pregnancy resulted from the rape, placing the offence in the high category 1 with an exceptional level of seriousness.

The court noted the 25-year disparity in the age of the victim and her assailant, adding that the assault took place in the child’s bedroom, where she should have been safest.

The judge said aggravating in the case was that the girl was 15 and vulnerable.

Her siblings shared the room with her and more likely than not witnessed the assault, the judge said.

Justice Cottle said that despite the submission by Raymond Cadette, who did not represent Jackson at the trial but had conducted mitigation on his behalf, the court would easily imagine why the other children on the bed would pretend to be asleep rather than risk becoming a victim of similar attention by Jackson.

The judge said the fact that there was unprotected sexual intercourse and that ejaculation had occurred were other aggravating features.

The mitigating features of the offence that the court identified was that Jackson had not used force other than that inherent in the offence.

The court did not find any aggravating features on the part of the defendant, who had no previous convictions.

Since his conviction, Jackson has accepted full responsibility for his action and has expressed remorse and asked for forgiveness, Justice Cottle said.

In a note to the court, Jackson said:

“I have hurt almighty God. I have already asked him to forgive me. I have repented and asked him to change my wicked heart to a good heart. Now, I realise what I have done, I have hurt this teenage girl, her parents, her family, my wife, my family, my community, my country, the entire court of justice in my country. For hurting all these people, I am asking all of them, every one of them, to forgive me. I repent of my guilty act. I am guilty. I am begging your lenience… I have made up my mind not to repeat this horrible crime.”

The judge said that considering the aggravating and mitigating features he felt that he must adjust the starting point from 50% to 55% per cent or 16.5 years.

Had Jackson entered an earlier guilty plea, he could have benefitted from a discount of up to one-third on his sentence.

There were two counts of rape in the indictment, the judge noted, adding that the rape occurred on different days, making them separate offences, rather than a series of acts constituting a single offence.

He said that the court was, therefore, of the view that consecutive sentences should apply.

He, however, said that the total sentence must reflect Jackson’s overall criminality.

Justice Cottle said that imposing consecutive sentences would have the effect of imposing a total sentence which is out of proportion to the offence, and this would be inappropriate.

He, therefore, sentenced Jackson to two years in prison on the second count of rape, which would run consecutive to the 16.5 years for the first count.
Renee Simmons appeared for the Crown.

6 replies on “At second trial, DNA seals case against rapist who impregnated victim”