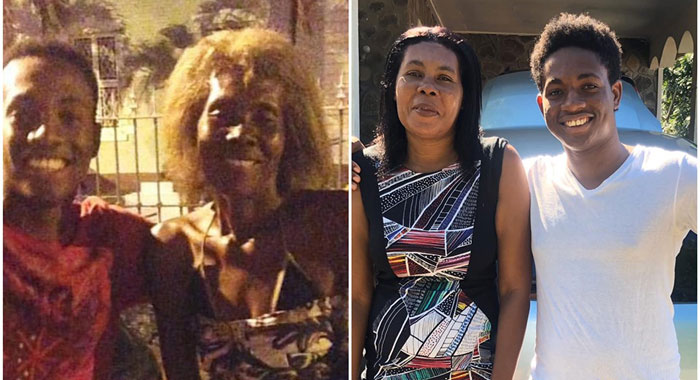 Left: Lisa Robert, left, and her son Oral, seven months ago when he took her off the street, contrasted with what she looks like today.

Orol Jahmaul Roberts had always known that the shabby-looking, tall, slim woman standing at various areas of Kingstown, begging passers-by for money is his mother.

But, he had been living with his aunt and her husband for most of his life, having moved about several times before arriving in their custody.

And seven months ago, as a 23-year-old married man, when he felt that he was in a position to rescue his mother from the streets, Orol made his move.

He took his 45-year-old mother in to live with him and his wife and since then, her life has been transformed.

Lisa has gained a significant amount of weight, and she might not be easily recognised as the person who spent years on the street begging.

Orol told iWitness News that his mother is getting professional mental health attention, saying that while she does not say so specifically, it is widely believed that she suffered much sexual abuse during her time living on the streets.

Lisa is longing to get in touch with her daughter, Lianna Parsons, who is believed to be living in Canada with her father, Leon Parsons — Lisa’s ex-husband, who hails from Vermont.

Orol said his sister should be between 16 and 17.

Orol told iWitness News that he had been living for a long time with his aunt and her husband.

The last time he remembers living with his mother, he was around 7 years old and she was married to her ex-husband.

“And everything after that just went downhill.”

He said that while people say that his stepfather was abusive, he can only remember “small instances when he wasn’t treating me the best, as a stepson” when he was around 6 years old.

Orol said that as a teenager and young adult, he would stop and talk to his mother when he met her begging on the streets, “letting her know that things going be different, give me some time.

“People would commend me and say that’s a good thing; you are not feeling ashamed of her.”

Orol is not sure why his mother took to the street to beg.

“I believe it’s because she was used and abused and you can say she didn’t have her daughter or her son to be with and I just think she doesn’t really share what she goes through, she just holds everything inside…”

He said that he and his wife were renting an apartment and they had a discussion saying that now that he is working they would work on getting her off the street.

“I wanted her to be in an okay place,” he said, adding that, suspecting that the adjustment would have been hard for her, he invited her to come and spend “a time with me or a day with me”.

He said he went to Kingstown and pick up his mother from under the Cobblestone Inn gallery.

He was living at Diamond at the time.

“Same time I carried her home, my wife started to wash out the clothes and started to clean her up and she took a bath and everything and it was just recovery from there.”

He said that in between that time she was like “kept on complaining about her dog, I want my dog and if the dogs could come out here”.

Orol said his mom used to have two dogs following her around Kingstown.

During the years that Lisa was begging in Kingstown, she lived in Montrose.

“But it wasn’t the safest, too, as well,” Orol said, adding that the house used to be burglarised a lot.

“And then you know what happened next,” Orol said, adding that that really pushed him to get his mother off the street.

“I heard people saying it but hearing her saying it is not safe and she had to stand up on the road at night, she feels safer being next to Handle Bar [the biker bar in Bentinck Square].

“She would be further up at the hospital side by the corner standing, standing up with her hand folded. She would rather come up at night to stand there, to be there, rather than be home at nights because people probably used to break in and abuse her at nights.”

He said that his mother never told him that she used to be sexually abused.

“But when she said it wasn’t safe, I asked her, ‘What do you mean?’ and she just smiled and looked away,” Orol said, adding that other residents of the area said that his mother used to be abused.

Orol told iWitness News it is overwhelming the feeling of knowing his mother is no longer on the street.

“I am not looking for anything for me because she just deserves better than that because all these years just being abused and somebody like that.  Somebody so kind like that, to just being tortured like that. That’s really unfair.”

Orol said he and his mother would like to work on finding his sister.

“Even if we can’t meet at the moment, at least some sort of communication; hear her, a video call or something of the sort to just know that she is okay and that she could see her daughter again.

“That would be very overwhelming for her. I know that.”