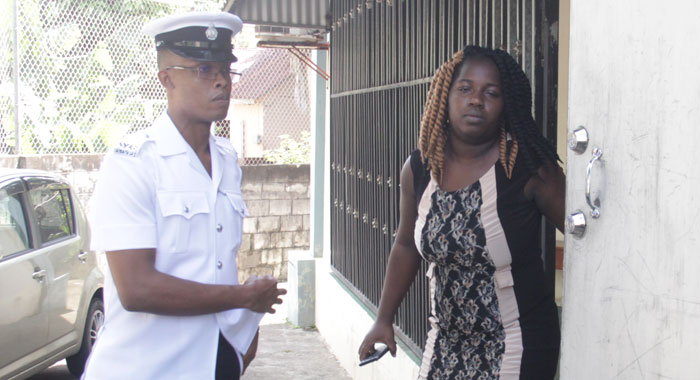 Eunice Dowers appeared to have some difficulty as she walked from the holding area to the courtroom on Monday. (iWN photo)

Even Eunice Dowers’ lawyer appeared to have been left speechless at her apparent quick recovery from an alleged “malady” immediately after her arraignment, on Monday, on 10 counts of money laundering.

Dowers, 25, who was born in Nigeria and is a naturalised Vincentian, was bent over and moaning as she entered the Serious Offences Court on Monday.

The Ratho Mill woman had a similar presentation as the chief magistrate read 10 charges to her and as her lawyer, Grant Connell, successfully argued for the postponement of her trial on 39 other charges, which was scheduled for three days beginning Wednesday.

But at the end of the proceedings, Dowers seemed to have immediately recovered, resulting in Senior Prosecutor exclaiming incoherently as the woman walked out of the courtroom.

“I can’t handle the theatrics. She is as powerful as everyone going out there and was bent over moaning coming in. And it didn’t escape counsel’s notice either. I saw the smile at her recovery.”

Connell, known for rebuttals in the courtroom, seemed lost for words.

He said nothing in the brief period between the chief magistrate’s comment and the point at which the order was given for the court to rise for the adjournment.

The 49 charges Dowers now faces relate to her alleged unlawful use of a credit card and chequebook, belonging to her former boss, 90-year-old businessman Bertille “Silky” Da Silva, owner of Star Garage.

Police are alleging that between Aug. 1, 2018 and Jan. 31, 2019, at Kingstown, Dowers converted criminal property, to wit, the sum of US$11,283.82 and EC$6,159.39 knowing or having suspected that those sums, in whole or part, directly or indirectly represent proceeds of criminal conduct.

She was granted station bail on the weekend in connection with the 10 new charges and was ordered to appear before the Serious Offences Court on Monday.

However, when the matter was called, the chief magistrate told the senior prosecutor that the court had received a call indicating that Dowers “had a malady”.

“She was granted bail to appear today,” Delplesche responded and asked the chief magistrate to stand the matter down to see if Dowers would attend court.

The prosecutor told the court that if Dowers did not attend, he would ask the court to issue a warrant for her arrest.

When the matter was recalled sometime later, Dowers was still absent and Delplesche applied for the bench warrant, which the chief magistrate granted.

Dowers attended the court sometime after the bench warrant had been issued but complained that she was unwell.

She was taken to a holding area until her matter was called.

When the matter was called, Dowers, making groaning sounds, walked slowly to the dock and complained of being unwell.

She leaned against the wall of the courtroom during her arraignment on the 10 additional charges.

The accused woman moved her lips throughout as if repeating the words of the charges and pleaded not guilty to each of them.

On two occasions, Dowers, who was represented by counsel Grant Connell complained that the wording of the charges were confusing.

On each occasion that Dowers complained, Connell went and spoke to her in a manner that was inaudible to the rest of the courtroom.

Counsel Connell told the court that Dowers has complained that after she was charged, Da Silva had been approaching her, including when she passed in front of Star Garage.

Connell asked the court to instruct Da Silva to have no contact with Dowers.

The chief magistrate told the lawyer that the prosecutor would do what is necessary to make Da Silva understand that he is to have no contact with Dowers.

Connell also told the court that his client was allegedly beaten by police on the weekend, but because of “the colonial structures that we have”, she could not file a report with the police complaints department and would try to do that on Monday.

The lawyer apologised for his client not attending court on time.

Regarding the date of the trial, Connell observed that there were 10 new charges on which the defence had to take instruction, two days before a trial was scheduled to begin.

The chief magistrate then adjourned the hearing of all the matters to Jan. 8 to 10, 2020.

Connell said that every time his client comes to court the police bring more charges against her.

The chief magistrate said that she trusts that the investigations are complete.

“Well, given who the VC is, I expect the police to be on their p’s and q’s and running round like headless chickens. That’s how the system is.”

Dowers first made headlines in early February after her then co-worker at Star Garage, social commentator Marlon Stephenson reportedly struck her during a lunchtime officer brawl at the Parts department of Star Garage.

Joshua Da Silva, a manager of Star Garage, told iWitness News then that the findings of the investigation into the brawl would be forwarded to the board of directors, who would make a determination of a course of action.

The charges against Dowers were brought later that month, but no charges were filed in connection with the office brawl.