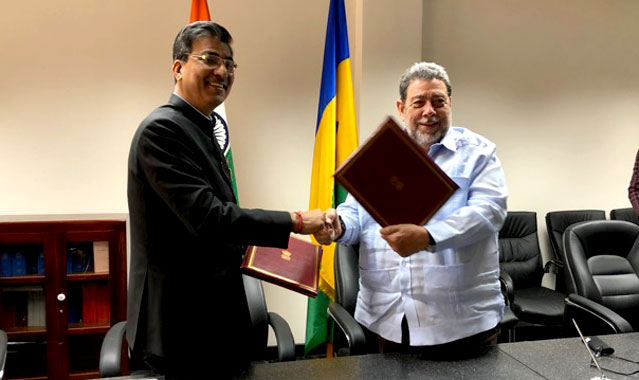 St. Vincent and the Grenadines (SVG) and India have entered into another formal agreement on cooperation, with the signing of a memorandum of understanding (MOU), on Wednesday, at Cabinet Room.

The MOU concerns the implementation of Quick Impact Projects (QIP), which deals with small projects not exceeding EC$50,000, intended to have short gestation periods, and expected to improve the lives of Vincentian residents in local communities.

Kanyal described SVG-India ties as “warm and building”, adding that both countries share common values, including respect for human rights, representative democracy, the English language, cricket and a shared history.

The envoy mentioned a number of areas of cooperation between India and SVG, including health and medicine, culture, information communication technology and SVG’s recent membership of the International Solar Alliance (ISA).

He thanked Gonsalves for his leadership in promoting regional integration as well as the leadership provided internationally by SVG, noting the country’s revitalisation of the UN Economic and Social Council (ECOSOC) while serving as president.

Meanwhile, Gonsalves thanked India for it support of SVG, not just with the Quick Impact Projects, but also throughout the years of diplomatic relations between both countries.

The prime minister emphasised the very close working relationship between both countries at the United Nations, adding that India was one of SVG’s biggest supporters in its successful bid for a non-permanent seat on the United Nations Security Council.

The prime minister said there are other major areas of cooperation and funding offered by the Indian government.

Gonsalves mentioned projects such as the US$1 million revitalisation project for the arrowroot industry, SVG’s involvement in the ISA and cooperation in the field of traditional medicine.

He also mentioned the US$14 million line of credit India has offered to CARICOM to be used for renewable energy, infrastructural and other projects that align with governments’ priorities.

The prime minister reiterated his gratitude on behalf of the people of SVG for the support from the Indi-an government and especially for the collaborative work done with the local community of Vincentians of Indian descent that has allowed for significant growth in the relationship with that group.

The high commissioner, who is accompanied by his wife, is expected to leave SVG on Friday.