‘LGBTQIA+ agenda … is an attack on the family’ — preacher 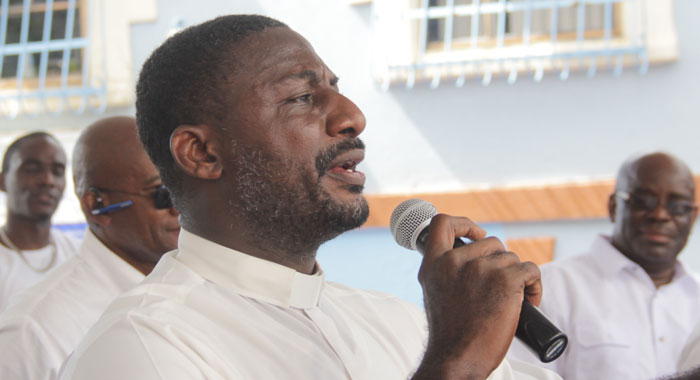 The Reverend Adolph Davis addressing the rally in Kingstown on Thursday. (iWN photo)

A Christian preacher says that the family, as the foundation of society, has been shaken because of several things, but he has to highlight the “LGBTQIA+ agenda”.

“It is a serious thing. It is an attack on the family, my brothers and sisters,” the Reverend Adolph Davis told a rally in Kingstown, on Thursday, in support of the anti-buggery and gross indecency laws in St. Vincent and the Grenadines.

Davis, a Methodist cleric, said deliberately sabotaging the principles of procreation is an attack on the family.

He was speaking at the rally organised by the Christian Coalition, a group of churches that had bonded together amidst a legal challenge to the constitutionality of SVG’s anti-buggery and gross indecency laws.

“And the problem is not that they can’t make because some problem with them being able, them can’t mek because they can’t mek. That’s how God mek nature.”

“It is an attack on the family when we encourage our men to get a smallie,” he said, a reference to adulterous relationship between older married men and younger unmarried women.

“Say Amen!” he told the hundreds of persons, mainly wearing white, the colour that the Christian Coalition had asked participants to wear at the event.

“And here nuh, at times, we encourage the nonsense. We gi’ the man a bump and say, ‘Yeah boy, you’re a bad man.’

“I didn’t hear amen for that,” Davis said.

The preacher said that it is an attack on the family when parents cannot get over themselves for the good of their children.

He said it is an attack on the family when children have to be moving from one household to another, Davis said, adding that that is not how God intended for it to be.

The reverend also spoke out against parents who pay more attention to their job and making money than to their children.

“Too many children are raised by strangers. It is an attack on the family when our children’s primary babysitter is the tablet, TV or cell phone,” Davis said.

He said that some parents behave as if a handheld device is a necessity and because they don’t want to spend time with their children they give them tablets and cell phone.

He also spoke out against the sexual abuse of children.

“It is an attack on the family when our big men troubling our little boys and the little girl and them. It wrong. It wrong…  I heard a song the other day calling them dutty man because it wrong.

“When did we become a society that want to look the other way? Now, the truth is that this been happening a little while but we keep encouraging it, tolerating it, excusing it. It wrong man. Tekking away the innocence of our little children,” Davis said.

He said the home is supposed to be a safe place.

“Some ah you does know the wrong thing them going on and yo’ doh talk. Some ah you see the 13-year-old live next to you and the gyal geh pregnant and yo’ just left the thing so. We have to stand up against it.”

Davis said that when a society accepts “the homosexual agenda, what we are covering up and not addressing is that there are a lot of people who felt unloved, who are broken and abused and molested and damaged and that’s how they turn to homosexuality and then you want to call that an orientation? That is wrong.”

“It is an attack on the family when we borrow foreign values and fail to discipline we children and them. Too many parents have to ask the children’s permission. ‘Tommy, can I spank you today?’ Craziness!

“Our families need to be grounded in the word. That’s how God designed it. That’s why the first thing God gave the family –Adam and Eve — was the word.

“My brothers and sisters, our families are under attack but we thank God that we are more than conquerors through him that loves us and we will take back our families,” Davis said.