Buggery case ‘a challenge against God himself’ — lawyer 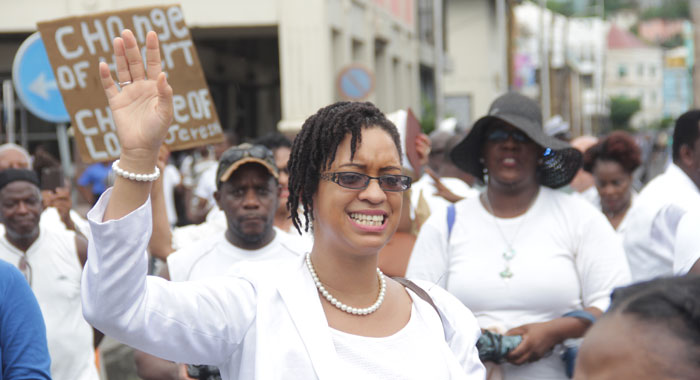 Lawyer Mandella Campbell raises her hand in praise during the march and rally in Kingstown on Thursday. (iWN photo)

The lawsuit against the anti-buggery and gross indecency laws in St. Vincent and the Grenadines is a challenge against God, says a lawyer for churches suing for the retention of the laws.

“It’s a challenge against God himself because in the essence of this challenge, we are called upon to call a wrong right and to call what is wrong permissible and allowable in the guise of human rights,” Mandella Peters told a rally held by Christian churches in Kingstown on Thursday.

Gay Vincentians Sean MacLeish and Javin Johnson are asking the court to declare unconstitutional, the two sections of the Criminal Code that criminalise buggery and gross indecency.

Peters said that while the lawsuit is a constitutional challenge, “the essence of it, I believe it is a challenge against morality”.

Peters said that contrary to some comments, the laws are not colonial, having been enacted by an independent St. Vincent and the Grenadines.

“These claimants and others who support this position would have us to believe that these are draconian, archaic laws which are just a relic of our colonial past.

“But I will ask them to do their research properly. Because when our Criminal Code was enacted in 1988, we [had] been an independent nation since 1979, England [had] repealed their buggery laws already in 1967. Yet, the independent parliament of St. Vincent and the Grenadines chose to let buggery remain on our law books.”

Peters’ father, Parnell Campbell QC, was attorney general and Minister of Justice in 1988.

Campbell was among hundreds of persons, most of them wearing white, which attended the march and rally in Kingstown.

Peters noted that the claimants are arguing that the buggery and gross indecency laws are unconstitutional, illegal, null, void, invalid and of no effect to the extent that these laws criminalise any consensual conduct among persons above the age of consent.

She said she believes this is because they see the legislation as a moral law.

“This was a righteous law, this is a health law, but now moves are being made to strike these laws down from our law books so that immorality will prevail, so that unrighteousness will come into our country,” she said.

Peters said a lot is being said about love.

She said that outside of Christian beliefs, a case is made out against buggery.

“But that is not going on the media. Is it? They are not promoting that because they are just talking about rights and rights but we need to get down to the very act, the very behaviour, that is very unhealthy, it is dangerous, it is immoral, it should not be promoted at all.”

Peters said some persons would want to say what she is saying is hate speech.

“But it is not hate. It’s love because I am telling you the truth; the rectal tissue with its thinner walls is more vulnerable to tearing than the vagina during intercourse.

“Yet they say let’s repeal the buggery laws to deal with HIV and AIDS. Does that make sense? Promoting the very behaviour that causes increase in HIV and AIDS? It made no sense whatsoever,” Peters said.

Peters is one of the attorneys representing the Christian Coalition, which has asked the court to allow them to join the government in defending the lawsuit.

The court will rule on Nov. 20 whether to allow the 10-chruch coalition to join the lawsuit.

10 replies on “Buggery case ‘a challenge against God himself’ — lawyer”