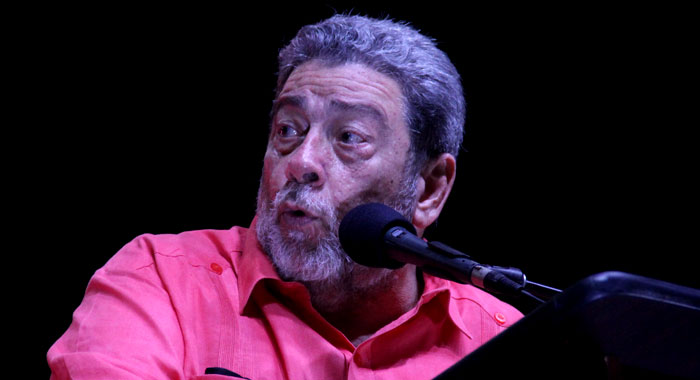 Prime Minister Ralph Gonsalves says that anyone who breaks ranks with his Unity Labour Party has no political future outside of the organisation.

He made the assertion in Arnos Vale on Sunday, where the party celebrated its 25th anniversary.

The ULP was formed a quarter-century ago with a merger of the then Gonsalves-led Movement for National Unity, and Vincent Beache’s St. Vincent Labour Party.

Since its formation, the party has enjoyed majority support among the Vincentian electorate for 21 years, and has been in office for 18.5 years, Gonsalves noted.

“There is no other political party in CARICOM that can boast such a level of political success,” he told the rally, the highlight of which was a performance by Jamaican artiste Busy Signal and his band.

Gonsalves said that the ULP is not just a party.

“We are at the heart of the national movement. We are at the centre of the labour movement and even when you have some sell out labour leaders who, for political reasons, oppose the ULP, they are opposing a party which defends the working people and they are acting against their own members’ interest and labour will remain steadfast for the working people of this country,” he said.

Gonsalves said the ULP has a vision, a philosophy, and “a framework of the spirit of   our civilisation, manifested not only through, but very much through successive generations of women of whatever ethnicity.”

He said his party is also regionalist and internationalist that link with like-minded persons and organisation across the region and the world.

“And I tell you this further: anytime anybody within this Unity Labour Party, which is a national movement, the heart of the labour movement and which is a family, and any renegade, any traitor, and any castaway who leave the labour family, they are dead politically.

“I tell you this: we have had one or two opportunist of different ideological shapes and sizes,” he said as someone close to the front of the stage shouted out “Jomo!”

“We have had opportunist of different shapes and sizes but I want to tell you this: you cannot leave the Labour family and say you are interested in the people because the most progressive political movement and organisation in the CARICOM region is the Unity Labour Party and the Unity Labour Party government. So, if you want to say you are interested in people and you become a traitor, a renegade, or a castaway, you are simply an opportunist.

“And I don’t have to speak about any matter other than to stay steadfast to the principles that Vincent Beache and the Unity Labour Party founders set for us.”

Gonsalves said that in 200l two gentlemen “who are persons of substance who thought that they could divide the labour movement, they went into one election in 2001 and since then, we haven’t heard from them in politics again.

“You do not leave the Labour family and survive if you are interested in politics. Not possible because of the way in which we are grounded.”

The prime minister was referring to former ULP parliamentarians, Ormiston “Ken” Boyea and Stanley “Stalky” John, whose People’s Progressive Movement (PPM) performed poorly in the March 2001 elections that brought the ULP to office.

In recent times, some former ULP members, including some who have been candidates or vied to be candidates in elections appear to be courting the main opposition New Democratic Party.

These persons include Michelle Fife, who ran on behalf of the ULP in West Kingstown in 2010, and Kirk Da Silva, who failed in his bid to become the ULP’s candidate for Marriaqua in 2015.

In October, Jomo Thomas, who was the ULP’s candidate for South Leeward in 2015 resigned from the party and as its caretaker for the constituency.

Thomas also indicated that he will resign early next year as Speaker of the House of the Assembly.

He has so far given no indication about whether he still supports the ULP politically or whether he intends to join another political organisation.

Thomas was a founder member of the now-defunct People’s Movement for Change, which was launched in 2008, and whose members had maintained that it was not a political party.

24 replies on “Anyone quitting ULP is ‘dead politically’ — Gonsalves”