Man tells woman go naked in public or get raped 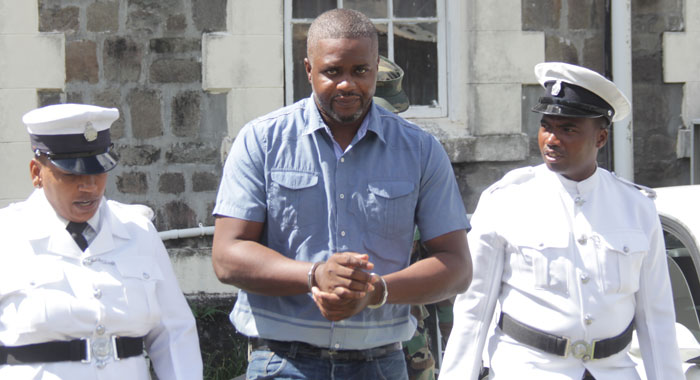 Levorn Williams is escorted to prison on Friday. (iWN photo)

A Belvedere man has been jailed for one year for forcing his then ex-girlfriend to go naked in public, threatening to rape her if she did not.

After Levorn Williams, 36, serves the prison term for abduction, a further sentence of 11 months and 20 days in jail will be suspended for one year.

Justice Brian Cottle handed down the sentence at the High Court on Friday.

“Mr. Williams, on that day, you behaved very, very bad. And things could have turned out a lot worse for you had the jury returned a verdict on the other offences for which you were charged,” Justice Cottle told Williams after passing sentence.

The judge noted that the maximum penalty for one of the other offences with which Williams had been charged — attempted rape — is life imprisonment.

“The jury was convinced that you did not go beyond making preparation and it is for that reason that they returned the verdict that they did. But that in no way excuses or condones the way that you behaved on that day. I hope that, as your counsel says, that you have learnt your lesson from that behaviour and we will not see you again before this court.  You understand?”

Williams had also been charged with attempted rape, for which the jury found him not guilty, and assault occasioning actual bodily harm, a charge on which there was a hung jury.

The facts of the case are that the complainant went to a high school reunion on Aug. 30, 2015 and Williams who was also a member of the graduating class attended the event.

At the end of the event, Williams agreed to give the woman and two other schoolmates a lift, as their arranged transportation did not show up.

Williams dropped off the other two schoolmates along the way then asked the complainant if she was ready to go home.

The woman said she was ready to go home, indicating that she had a busy day at work ahead of her the following day.

However, as Williams approached the road leading to Technical College in Arnos Vale, he told the woman that he was taking a shortcut into Kingstown.

He, however, drove the vehicle to Sion Hill Bay and refused to take the woman home when she repeatedly asked him to do so.

There was a confrontation between the two and Williams told the woman to take off her clothes, which she did.

Williams indicated to the woman that he would rape her if she did not run.

The woman ran out of the vehicle naked in an effort to escape Williams, who later drove away, leaving the woman naked and distressed.

The woman sought help at a nearby home, where the residents gave her a shirt to wear.

The woman was taken to the police and she lodged a report.

The police went to Williams’ home, where they met him in bed with his vehicle parked in his yard.

The vehicle contained a bag belonging to the woman.

Williams was arrested and charged.

In handing down his sentence, Justice Cottle noted that there was no victim impact report before the court.

The woman also did not attend Friday’s sentencing.

The judge noted that there are no sentencing guidelines for abduction and that the court continued to be guided by decided cases.

Justice Cottle noted that the maximum penalty for abduction is five year in prison, adding that while abduction is not a common offence before the court, in two recent matters, the court adopted a starting point of two years in prison.

The judge said he saw no reason to depart from that.

He identified the aggravating feature of the offence as the fact that Williams has shared an intimate relationship with the complainant in the past, and therefore, the woman had trusted him.

“He abused that trust,” the judge said, adding that Williams humiliated the complainant by forcing her to run naked to strangers for help.

Justice Cottle also noted Williams’ threat to rape the woman, saying that these features merit moving the starting point up to three years.

The only mitigating feature, the judge said, is that no weapon was used, and no gratuitous violence was meted out.

The judge found no aggravating feature of the offender, but noted, in mitigation, that Williams had no previous convictions.

In light of Williams’ previously unblemished record, the judge reduced the sentence by one year, bringing it back to the starting point of two years in prison.

There was no guilty plea and, therefore, no discount on the sentence.

However, the judge deducted from the sentence the 10 days that Williams had spent on remand, bringing the sentence to one year, 11 months and 20 days in jail beginning last Friday.

The judge said that having considered the practice directions regarding suspended sentences, he was of the view that Williams’ behaviour warranted a custodial sentence.

Earlier, Williams’ lawyer Patina Knights had argued for a non-custodial sentence for her client.

She said that Williams had an 8-year-old son and is expecting another child in June.

Knights told the court that her client is maintenance coordinator at St. James School of Medicine and also runs a business that provides jobs for young men in his community.

She said that Williams lost his mother on the day he committed the crime.

An immediate custodial sentence, the Knights argued, would be disruptive to her client’s family, she said, adding that his action on Aug. 30, 2015, was out of character and that he is unlikely to be a repeat offender.