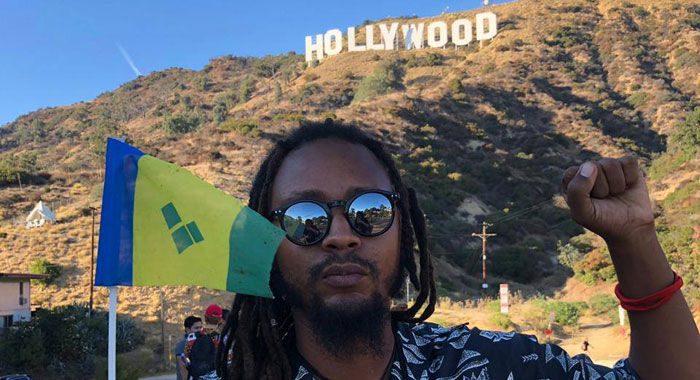 Since its inception in 1994, the film festival has been a platform for rising and established filmmakers from emerging voices, while exploring innovations in storytelling across film, television, online, and more.

The Festival presented a combination of over 100 documentaries and short films, over 50 filmmakers.

The community-at-large was invited to celebrate the artistry of this year’s filmmakers whose projects cover diverse topics, stories, techniques and broad themes multi-layered with humour, drama, and reality.

Vincentian Akley Olton, who is fluent in Spanish and English and based in the Caribbean, was invited to Los Angeles by the Black Hollywood Educational Resource Center.

He presented his film African American Film Marketplace and S.E. Manly Short Film Showcase during the festival, which ran Oct. 23-27.

His short film, Black Doll, was screened for two nights at the Cinemark 18 and XD Theater, in the Howard Hughes LA Complex in Los Angeles California.

Black Doll is an intimate picture of a young girl’s relationship with her dolls and her hair, touching on a range of issues including femininity, race, and self-presentation. It was written, directed and edited in St. Vincent and the Grenadines and features an all Vincentian cast, including 10-year-old Natalia Olton.

While Black Doll ventures into territory which could easily become trite or stereotypical, it aptly avoids both pitfalls, instead, it brings the audience a truly moving piece with intrigue, suspense, and illumination in its short four minutes.

Black womanhood is boldly front and centre as the powerful young filmmaker’s deeply personal characters seek to find his truths in worlds that are not fully conducive to their needs.

The imagery in each film is powerful and unique and in conversation with a body of work that spans across cinema and genre.

Black Doll can be described as strict realism told through a surrealist lens. With an art-house feel to the whole piece, it appears to be shot on authentic film.

It fits itself neatly into the steadily growing body of visual work which creates space for black women and girls to see themselves represented in deep and meaningful ways. The eyes of the young filmmaker, himself not a girl, are kind and deeply personal.

This is given extra weight in the credits when the audience learns that both the actresses in the film share his family name. The love with which this story is told, and the depth of the understanding that is given to the young protagonist’s story, shows a deep bond between filmmaker and his subjects.

The film gets inside the head of the lead, but also, inside a broader consciousness around the ways in which black girls and women are often pigeonholed. The film does an excellent job of portraying the threat to self-confidence that is held in commercials, in the casual comments of adults, and in the blue-eyed, straight-haired presence of white dolls, for black girls.

Perhaps, Akley’s experience can help enlighten the many cynics and disempowered members in our struggling creative communities who are on the verge of giving up hope, and on some end educate those in power to the value and viability of a functioning creative industry, the development of a cultural bill to support its genesis.

“Even though we are surrounded by vast limitations regarding finances and institutional support, change is evident and the paradigms are shifting. We have to start working to ensure that the creative visual industry in St. Vincent and the Grenadines gets the assistance and support it requires to come into existence.”

He said his story can be considered proof of the significance of arts education and that his success and experiences only came into fruition as a result of his interest in the creative arts, the keen support of concerned educators, in particular,