Canouan shooting victim ‘seems to be getting worse’ 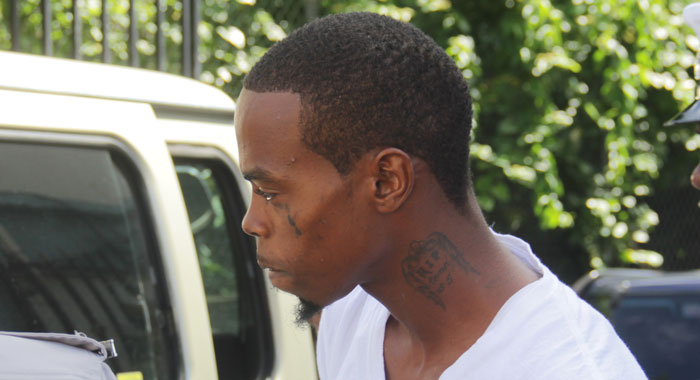 The accused, Shammai Hazell on his way back to prison on Monday. (iWN photo)

The man who was shot in Canouan during what police say was an armed robbery “seems to be getting worse”.

Prosecutor Corlene Samuel made the disclosure to the Serious Offences Court in Kingstown on Monday, as the crown continued its objection to bail for the accused man.

Shammai Hazell, of Bequia, was, for a second consecutive week, denied bail in connection with the charges.

He is charged that on Nov. 23, at Fisheries Canouan, he unlawfully and maliciously wounded Judson Jacobs, of Arnos Vale, with intent so to do.

Hazell was further charged that on the same date and in the same place, being armed with a gun, he robbed Jacobs of one black and green Nike bag containing EC$10,000 in cash and at the time of so doing and in order to so do, put Jacobs in fear of being then and there subjected to force.

Jacobs, 26, of Arnos Vale, was shot in Canouan, where he had gone to purchase conch on behalf of a local exporter.

Hazell was denied bail when he first appeared in court on Nov. 25 as the prosecution told the court that the virtual complainant was still receiving intensive care at the Milton Cato Memorial Hospital.

And, on Monday, Samuel told the court that Jacobs was still in the Intensive Care Unit and that his situation was still listed as critical and seems to be getting worse.

Samuel asked that Hazell be remanded in custody for another week.

Last week, one of Jacobs’ relatives told iWitness News that he had no “feeling from the shoulder down” since being shot.

2 replies on “Canouan shooting victim ‘seems to be getting worse’”