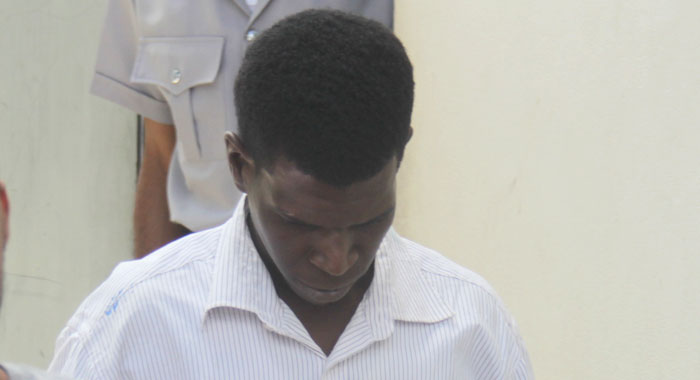 The accused, Tyson Spencer holds down his head as he is escorted to prison on Monday. (iWN photo)

A Green Hill man has been charged with attempted murder and unlawful and malicious wounding in connection with the Nov. 22 shooting of three men at Heritage Square, Kingstown.

The charges were brought against Tyson Spencer, 30, who was in 2011 charged in connection with a murder that occurred at Heritage Square.

Spencer was brought before the Serious Offences Court in Kingstown, on Monday, charged that on Nov. 22, at Heritage Square, Kingstown, he attempted to murder Curtland Jack, of Campden Park.

He was further charged that on the same date and place, he unlawfully and maliciously wounded Dwayne Peters, of Kingstown Hill, and Deron Quashie, of Choppins.

The men all suffered gunshot injuries at the popular weekend entertainment spot.

She told the court that two of the virtual complainants are still warded at the Milton Cato Memorial Hospital, with Jackson who is in the Intensive Care Unit listed as being in a critical condition.

Samuel asked that Spencer be remanded in custody for two weeks and a bail review be conducted then.

Chief Magistrate Rechanne Browne did not consider bail at that point and ordered that Spencer be remanded in custody and the court be given a comprehensive medical report on the complainants.

The chief magistrate set the bail review for next Monday, Dec. 9.

In June 2011, Spencer was charged with the murder of Clevedon “Junior” Chewitt,  26, of Belair.

Chewitt died on June 25, 2011 after receiving a stab wound to the left side of his neck at Heritage Square.

In October 2012, Chewitt, pleaded not guilty to murder and guilty to the lesser charge of manslaughter.

Chewitt had bumped into Spencer who then retrieved a knife from his pants and stabbed him in the left side of his neck.

In a police statement, Spencer said: “He come and war whine up pon (dance with) the woman dem who ah been liming with. The daughter fo’ the woman ain’t war give this guy ah whine and he keep humbugging her.”

Spencer was sentenced on Nov. 30, 2012 to eight years in prison for manslaughter.