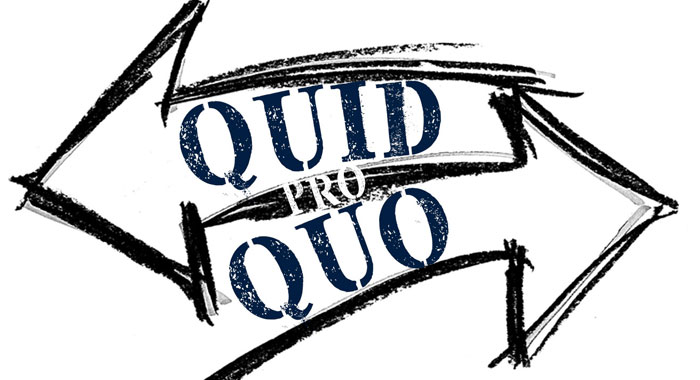 Who is he? Where was he born? Where does he live?  Why does he have first, middle and last name? Where could I find him? Every name has a unique meaning and Quid Pro Quo is no exception. His name means a favour or advantage granted or expected in return for something. While his movements are shady, one sure thing about him is that he has a lot of money. Therefore, to find him we must follow the money trail.

First let us look for him in the church. He is not likely to be found there because “the love of money is the root of all evil,” (1 Timothy 6:10) and the folks there are as poor as church rats.

The next place to look is the school where it appears that the girls spend significantly more money than the boys. They must be more familiar with Quid Pro Quo. Further investigation shows that each student passing five or more subjects including English and maths receives $500. Is this money given as a reward to inspire better performance? Some research suggest that tangible rewards are a disincentive and lead to lower performance. Since this is the case, perhaps Quid Pro Quo may have an answer.

We follow the money trail on the road where delivery trucks are offloading free lumber, galvanise, and cement. Who is behind the steering wheel? It appears to be Quid Pro Quo. The news seems to suggest that Quid Pro Quo changed residence from New York to Florida. But since there appears to be a money trail here, has he taken up residency in our country?