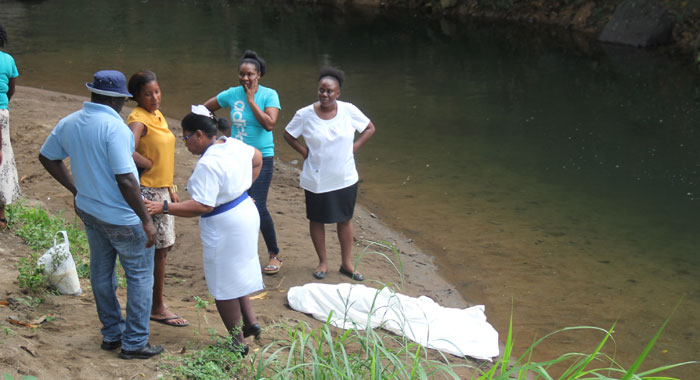 The scene of the drowning in Penniston on Tuesday. (iWN photo)

The body of a 7-year-old girl was fished out of a pool in the river in Penniston sometime around 4 p.m. Tuesday.

Homicide investigators have launched an investigation into the death of Rishanna Browne, of Francois, Vermont, who is believed to have drowned.

She is said to have gone swimming in the river in Penniston along with two of her cousins who are around her age after school.

A relative of the dead child told iWitness News that her grandmother, a farmer, was supposed to go Penniston Tuesday afternoon.

The child’s grandmother, Mary Browne, told her to wait for her at a shop in Penniston after school.

However, the child, a Grade 1 student, is said to have opted to go to the home of her cousins, located on the riverbank a few hundred yards away from the shop in another area of the village.

iWitness News understands that one of the dead child’s great aunts was on her way home from her roadside business when the child’s cousins came running to her, saying that she had drowned.

The aunt, a non-swimmer, went to the riverbank where she saw the child lying face down under the water.

She asked a young man to retrieve the child from the water.
The great aunt pumped the child’s chest and water ran out of her mouth, but she did not respond.

The child’s body was removed from a “deep hole” (pond) in the river in an area called Barbay, which is said to have claimed other lives by drowning.

3 replies on “Girl, 7, dead in suspected drowning in Penniston”