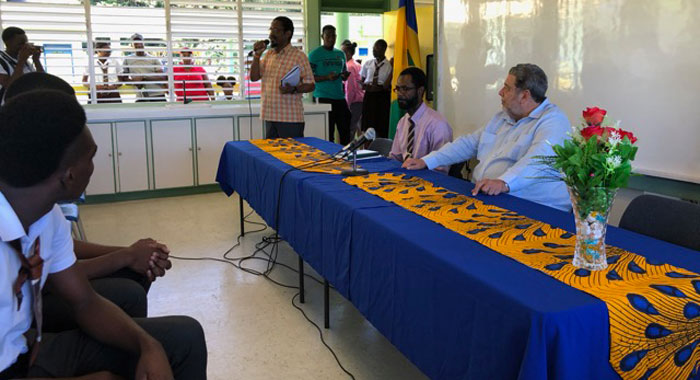 Prime Minister Ralph Gonsalves, on Thursday, visited the Central Leeward Secondary School in Peter’s Hope to celebrate with the students and teachers.

The visit was prompted by the outcome of the just concluded secondary school football tournament that saw both teams from the Central Leeward Secondary School winning their respective divisions.

In addressing the hall of student and staff, Gonsalves recounted the confrontations between parents and supporters of the Central Leeward Secondary School Warriors and himself, who were there supporting the Georgetown Secondary School Gladiators, a school from his constituency.

He also encouraged the students to use the opportunities available to them through the education revolution that guarantee each child of secondary school age, access to secondary education. There was also a question and answer segment during which students posed questions to the prime minister.

An issue raised by one of the students was that of football shoes for the members of the team.

In response, the prime minister offered to provide football shoes for each member of both teams — a total of 50 pairs — and half dozen balls, an announcement that drew thunderous applause.

Following the general activity, the prime minister met with the principal and staff, and had very fruitful discussions where a number of issues affecting the school were addressed, the included students performance, security and issues affecting staff, a release by the Office of the Prime Minister said.

The principal thanked the prime minister for the visit and the opportunity afforded the staff to engage in such a direct way.

As part of his visit to the school, the prime minister purchased lunch and had lunch delivered to the school for members of both football teams and members of staff and took the time to enjoy a meal with the students.