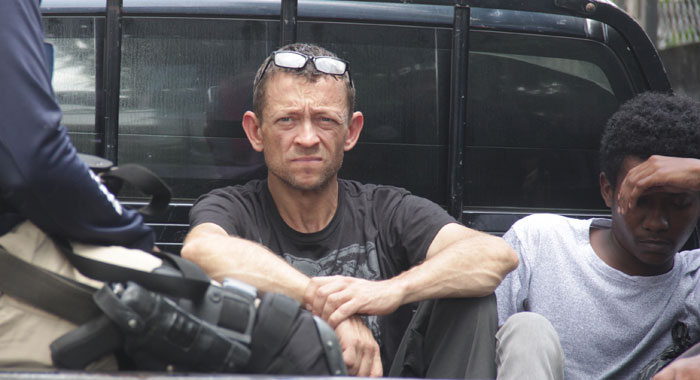 A Canadian man who was nabbed with 2,220 grammes (1kg/2.2lbs) of cocaine in a false compartment in his suitcase in Dorsetshire Hill exclaimed “Holy f**k” and collapsed to the ground when police made the discovery on Sept. 23.

Last Friday, the man, Lonnie Wilson, a 47-year-old waiter, pleaded guilty to possession of the drugs and was fined EC$30,000 to be paid forthwith or one year in jail.

Wilson is said to have paid the fine.

He was among three men arrested in connection with cocaine and marijuana found at the apartment.

Police also arrested, in connection with the drug bust, Glenlyn Lee, 37, a mason of Walvarooo, who was not at the apartment at the time, but withdrew the charges on Tuesday, after the guilty pleas by Wilson and Alexander.

The facts of the case are that on Sept. 23, about 5 a.m., Inspector Dwayne Bailey led a team of officers from the Rapid Response, Narcotics, and Special Patrol Units to the apartment building in Dorsetshire Hill.

The party went to execute search warrants in respect of controlled drug and firearms.

iWitness News understands that the search warrants were issued after weeks of intelligence gathering that also included a team led by Inspector Nolan Dallaway of the Rapid Response Unit.

On arrival at the apartment, Bailey and his team went to the top floor and met Wilson and Alexander leaving the apartment.

Bailey identified himself and the officers, showed and read the search warrant to them and conducted a search of the apartment, which revealed nothing illegal.

Bailey conducted a search on the suitcase Wilson was carrying and cocaine was found in a false compartment, in the bottom of the suitcase.

iWitness News understands that the men were leaving for the airport and a taxi had arrived to transport them there by the time the search was completed.

Sources say that the officers had cleared the men to leave when the inspector pulled out his knife and stabbed the suitcase, revealing a whitish substance resembling cocaine.

According to the facts presented in court, Corporal 615 Williams of the Narcotics Units conducted a field test that showed the substance to be cocaine.

The men were cautioned and Alexander said nothing, while Wilson said, “Holy f**k” and collapsed to the floor.

The men were arrested and Wilson was questioned as a result of what he said.

Alexander was taken to the ground floor where his apartment is located. The apartment was searched in the presence of Kevon Alexander, son of the owner of the apartment and a close friend of defendant Alexander.

Based on information provided by Wilson, a black Xbox was also removed from the living room of the apartment belonging to Jomodean.

The defendants along with the items removed from the apartment were taken to the Central Police Station.