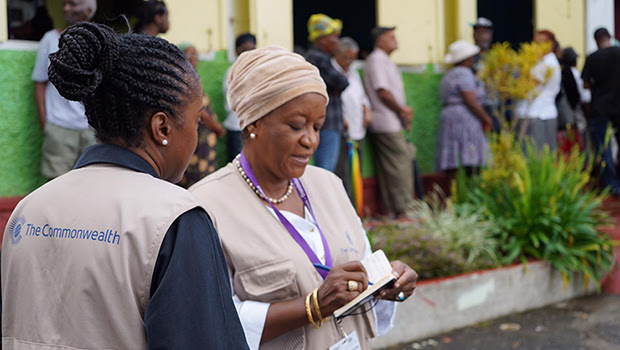 ROSEAU, Dominica (CMC) — At least three teams observing Friday’s general elections, in which the ruling Dominica Labour Party (DLP) was returned to power with a greater majority, said Saturday that the results reflected the will of voters who cast ballots in the elections.

The observer teams from the Organisation of Eastern Caribbean States (OECS), the Commonwealth, and the Caribbean Community (CARICOM), in separate news conferences, said that while there had been concerns about pre-elections violence, it did not prevent people from peacefully casting their ballots in support of either the DLP or the main opposition United Workers Party (UWP).

Preliminary results released by the Electoral Commission on Saturday gave the DLP victory in 17 of the 21 constituencies while the remainder went to the UWP.

Prime Minister Roosevelt Skerrit was sworn into office for a fourth consecutive term earlier on Saturday.

“The initial assessment of Election Day activities by the CEOM (CARICOM Election Observation Mission (CEOM) is that the voters were able to cast their ballots without intimidation or fear, and that the results of the 6th December 2019 General Elections reflect the will of the people of the Commonwealth of Dominica,” said Belizean Josephine Tami, who headed the 11-member CARICOM mission.

“It is, however, the pre-election day activities which caused some amount of concern to the election process. The level of disruption and violence as acknowledged by the general populace, escalated just days prior to the general election.

“Roads were blocked which limited access to movement of persons. However, by election day, the blockage to areas was discontinued and persons were able to move freely to conduct business and to access the polling stations to cast their vote,” she added.

For its part, the Commonwealth observer team, which was led by former Sierra Leone foreign minister, Zainab Hawa Bangura, said the results reflected “the collective will” of the people who voted in the poll, adding that it was conducted in accordance with the laws of Dominica.

“We commend and congratulate all Dominicans who participated peacefully in an important civic exercise,” she said, adding that the Commonwealth team was “particularly impressed by the large number of women and youth who participated in the electoral process, not only as candidates and voters, but also as polling staff, party agents and witnesses and observers”.

She said it is the hope that the peaceful atmosphere that characterised polling day would “prevail” and was calling on all Dominicans “especially political parties, candidates and their supporters, to continue to show magnanimity and to uphold their commitments to peace with a spirit of national unity, peace and solidarity.

“We urge that any disputes be addressed through the available legal mechanisms,” she told reporters.

Former Bahamas prime minister, Hubert Ingraham, who led the 20-member observer team from the OAS, said while they were concerned by the “strong rhetoric and the deterioration in the tone of the campaign in the weeks prior to the elections, the mission noted that the results reflected “the will of the people”.

It said that in order to strengthen the transparency and accountability of the electoral process, it “strongly” recommends Dominica considers the introduction of legislation to regulate political party and campaign financing “including clear limits on campaign spending, the identification of the source of funding, the prevention of anonymous donations and the limitations of private and in-kind donations to political and electoral campaigns”.

Ingraham said in this regard, the OAS is recommending its model legislation on campaign financing that “may provide a useful point of departure”.

3 replies on “Dominica election results reflect will of voters — observers”