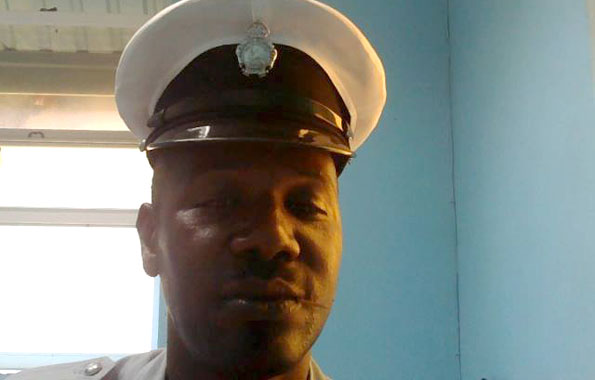 One of three cops who were suspended from duty pending the outcome of criminal matters against them is expected to return to work soon.

On Thursday, Corporal Enkem Richards saw burglary and criminal trespass against him dismissed after the complainant declined to offer evidence.

Richards was charged in connection with an alleged Nov. 25, incident in which he reportedly had an altercation with his wife.

Richards is said to have entered the neighbour’s property in pursuit of his wife, who is alleged to have gone there in an attempt to escape him.

Richards’ wife reportedly decided not to press charges against her husband, who she alleged had threatened and choked her.

The case came up, on Thursday, before Magistrate Bertie Pompey at the Colonarie Magistrate’s Court, sitting at Georgetown.

However, Richards’ neighbour took the stand and said, under oath, that she was not proceeding with the matter.

As a result, the charges against Richards were dismissed and he was told he was free to go.

Two other officers, both corporals of police, and both facing rape charges are still awaiting the outcome of their matters.

Corporal Derek Humphrey, of Chauncey, has been charged with the rape of a 15-year-old girl who told police that he raped her in his vehicle on Nov. 24 after having collected her at a house where she had gone, overnight, to avoid sexual assault at her home.

Separately, Corporal Michael Lynch, of Peter’s Hope, originally of Layou, has been charged with rape of a woman who was in protective custody as she is a witness for the state in a murder case.

Both Lynch and Humphrey have been granted bail pending the outcome of their matters.

5 replies on “Charges against cop dismissed”