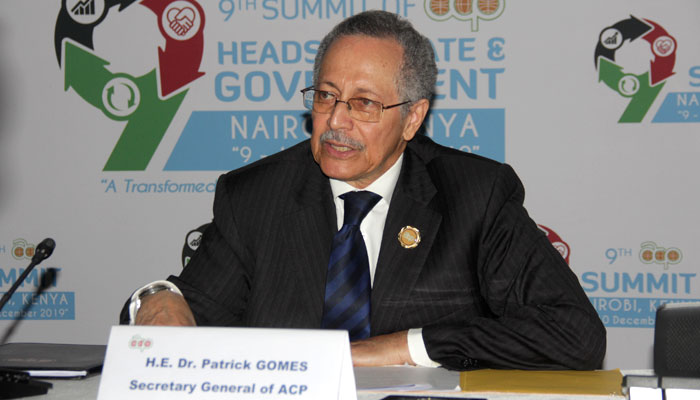 The Secretary General of the 79-member grouping, Patrick I. Gomes told reporters that the organisation is now better positioned to counter the untoward policies of more developed nations.

“We could best be seen and eventually evolve and grow into the counterfoil to what is the OECD — the Organisation for Economic Cooperation and Development. That’s the club; they do a lot of analytical work,” said Gomes, whose five-year tenure ends on February 28, next year.

“The dream — if there was ever a dream — is that the OACPS will be the counterfoil, the voice of the global South, of developing countries, in the analytical work, in the policy making, etc,” the Guyana-born diplomat said.

“The OECD, looks after the club of what I would call the rich and developed countries and now some that are developing are also going in that direction,” he added.

The OECD is an intergovernmental economic organisation with 36 member countries, founded in 1961 to stimulate economic progress and world trade. It is a forum of countries which say they are committed to democracy and the market economy, providing a platform to compare policy experiences, seek answers to common problems, identify good practices and coordinate domestic and international policies of its members.

Gomes said one major implication of the change in status is that the OACPS is now a more formal body.

“We are an organisation because we have not only a permanent secretariat but we have a formal constitutive act, that is the Georgetown Agreement,” Gomes said, referring to the Guyana capital, where the agreement that brought the ACP into existence was signed in 1975.

“We are showing that this organisation is linking members from three continents: Africa, the Caribbean, and the Pacific. So it is a more formalised way and we have elaborated, therefore, not only changing the names but also the objectives, the preamble, the structures.”

“But now we have put that as part of our organs. There will be an ACP parliamentary assembly,” Gomes said, adding that the OACPS will institutionalise certain things to show it has been elevated to formal organisational structure with several functions.

He said the reconstituted bloc will have increased visibility.

“We are, on certain periodic occasions, taking part in side events [of the United Nations]. We will have a greater say in having as an organisation, using our observer status, to collaborate an event on the programme; not a side event, but when the General Assembly or some other activity is taking place, the Organisation of African, Caribbean and Pacific States will host, organise, in collaboration with member states, an activity in the UN or elsewhere.”

Gomes said that the OACPS will work closely with other groups of nations that share common interest.

He said that the summit has been historic, adding that among the five major outcomes is that, on intra-ACP cooperation, leaders have called for the establishment of an intra-ACP and trans-regional cooperation policy framework.

The outgoing Secretary General said this will guide the group’s efforts towards strengthening ties and solidarity among the member states and regional organisations.

On the issue of addressing climate change, the leaders proposed a Nairobi Pledge for Urgent Climate Action that will canvass and circulate through the UN System.

‘This will focus on our own sovereign agency that acts collectively across our 79 member states to address climate change, what we call the climate crisis as the Prime Minister of Barbados [Mia Mottle] repeatedly told us and also to address its consequences on the daily lives of several people.”

On the blue economy, the summit agreed to an intra-ACP blue strategy under the leadership of Seychelles.

“This will be a platform to support all ACP states in their efforts to engage women and youth.”

Gomes said that the summit has noted with keen interest the progress that Kenya President Uhuru Kenyatta and his government has made in promoting the interest of youth and women in both legal and regulatory framework, and wishes to see it replicated in other countries.

The summit also called for the need to establish the business summit as a continued frame work for the ACP heads of state and government to engage the business sector.

Meanwhile, Angolan diplomat Georges Rebelo Chikoti who will succeed Gomes and serve as head of the OACPS for the 2020-2025 term, said that the bloc has a lot of potential.