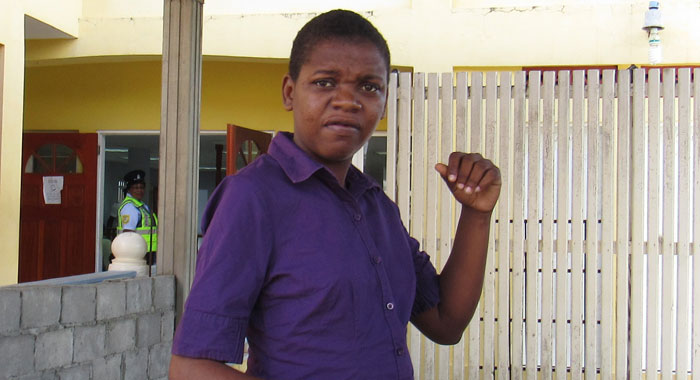 The defendant, Janett Thomas leaves the court after the hearing.

The theft charge against the 21-year-old disabled Park Hill woman, who was sent for a mental health evaluation after an alleged police beating, has been withdrawn.

Ballah informed the magistrate that he had not seen a follow-up report on Thomas from the Mental Health Centre, who had asked that she remain hospitalised for one month, after the initial two weeks that the court had ordered.

He further told the court that having reviewed the case file, the prosecution was withdrawing the case as the evidence was “extremely weak” and he did not want to waste the court’s time.

Thomas was sent for psychiatric evaluation after the charge was brought against her and after she had made several appearances at the Georgetown and Colonarie Magistrate’s Courts.

Bertie Pompey is magistrate at the two courts, both of which sit in Georgetown.

Thomas appeared before Pompey at the Colonarie Magistrate’s Court, on Sept. 9, charged that on July 21 at Park Hill, she stole EC$198, the property of fellow villager Andrea James.

She pleaded not guilty to the charge.

Pompey then ordered Thomas to be warded at the Mental Health Centre for two weeks for psychiatric evaluation.

Thomas’ mother, Arrianne Thomas, who had tears streaming down her face, tried to get the attention of the court orderlies saying, “Me car [can’t] go stand up with she (in the dock)?”

Janett’s mother told iWitness News in August that her daughter suffered a “stroke” when she was 3 years old and is now unable to use one of her hands.

Janett is also “retarded” as a result of the stroke and is often abused, including sexually, Arianne further said.

With her daughter still in the dock, Arrianne approached Ballah, and said, “Can I say something?”

Ballah told the woman to sit, telling her that she should have approached him before.

Arrianne then blurted out, “Your honour, can I say something?”

Court orderlies and the magistrate immediately reprimanded her.

The mother apologised for her outburst.

Granted the opportunity to address the court, Arrianne told the court that her daughter is “not mental”, and should not be placed in a mental health institution.

She said Janett has seizures and may have tried to commit suicide on two occasions after she was allegedly beaten by a female police officer at a police station in the east of the country, after the theft allegation.

In light of what the mother said, the court stood by the ruling to have Janett institutionalised for two weeks.

Janet returned to court, as scheduled, on Oct 31.

The evaluation report prepared by the mental institution recommended that she remain at the Mental Health Centre for a month for further evaluation, the magistrate said.

Pompey ordered that Janett be committed to the Mental Health Centre for one month and return to court on Dec. 2.

After the charge was withdrawn, Janett left the court in the company of her mother.