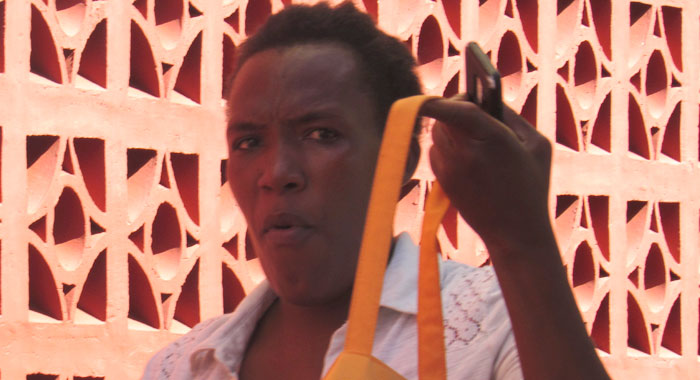 Jozel Horne as she leaves the Georgetown Magistrate’s Court.

A pregnant woman, who goes by the alias “Chicken”, has been bonded for four months over an incident in which she threatened her aunt with a rum bottle and a stone.

Magistrate Bertie Pompey handed down the sentence on Jozel “Chicken” Horne, of South Rivers, at the Georgetown Magistrate’s Court on Monday.

The magistrate had found Horne guilty of possession of an offensive weapon.

The court heard that on Aug. 1, at 8 a.m., Jozel’s aunt, Nelcia Horne, a Vincentian-Canadian was on the way to visit a cousin when she heard a voice behind her saying, “I feel like pull out yo’ weave them.”

She told the court the voice was that of her niece, Jozel.

“I leave and went in a shop because I know she (Jozel) would attack me,” Nelcia said.

“She always attacks me when I come to St. Vincent,” Nelcia told the court, adding that she returns to St. Vincent twice per year.

She said persons in the shop told Jozel to leave her alone but her niece picked up a bottle and a stone.

“I telephoned the police to accompany me home because I felt threatened,” Nelcia said.

In her defence, Jozel told the court that while she was on the phone with her sister, Nelcia accused her of videotaping her (Nelcia).

Jozel said she told Nelcia, “If you hit me with stick, me ah hit yo’ wid e bottle and e stone”.

Jozel said she threw the weapons down after Nelcia did not hit her and she went home.

Jozel informed the court that she, too, has filed a police reported against Nelcia regarding the incident.

The magistrate found Jozel guilty of the charge and bonded her to keep the peace for a year.

If she breaches the bond, she must pay the court EC$1,000 forthwith or go to prison for four months.

Nelcia told the court she has filed six assaults complaints with the Colonarie Police Station against her niece.