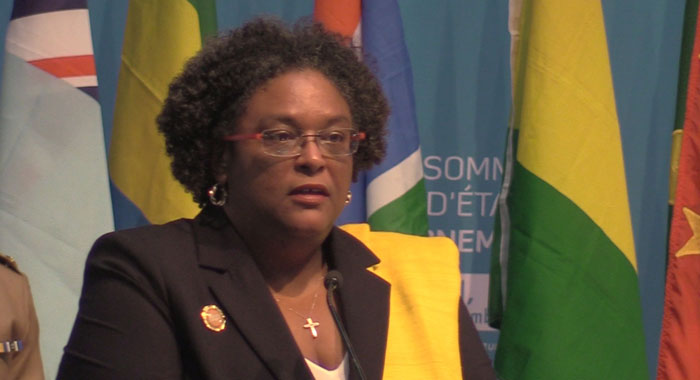 NAIROBI, Kenya (CMC) — Barbados Prime Minister Mia Mottle has urged the Africa Caribbean and Pacific Group of States (ACP) to consider vulnerability index, saying it is a “vexing issue” for the Caribbean region.

A vulnerability index is a measure of the exposure of a population to some hazard, and is contrasted with per capita income — the average income earned per person in a given area in a specified year.

The development community international uses per capita income, which puts most Caribbean Community (CARICOM) countries in the upper-middle-income bracket, thereby disqualifying them from certain types of assistance.

Several Caribbean leaders have long lobbied for the use of vulnerability index, saying that per capital index does not consider risks, most recently, the impacts of climate change, that can wipe out, very quickly, gains that the region has made over decades.

Mottley, speaking on behalf of her region, told the opening of the ninth ACP Summit of Heads of State and Government here, on Monday, that small states have been be labouring the vulnerability issue for decades.

“Thirty years ago, we, the small states of the world, determined that the best mechanism for access and determining access to official assistance or concessional loans ought to be the establishment of a vulnerability index, rather than the raw and crude mechanism of per capita income and Gross Domestic Product (GDP),” she told the two-day meeting, which is being held under the theme “A Transformed ACP: Committed to Multilateralism”.

The Barbadian leader said that as a result of “the failure to understand and appreciate the inherent vulnerability”, the ACP agreed in Cotonou to an arrangement that allowed free trade fully for only those countries that were heavily indebted poor countries (HIPC).

She said that this determination was also made on per capita income and GDP.

“We believe that the myopia reflected in that decision is seen by the extent to which our countries, those middle income countries like the Bahamas, are facing serious restructuring and reconstruction as a result of the hurricanes that have literally brought them to their knees.”

On Sept. 1, Hurricane Dorian struck the Bahamas, leaving US$3.4 billion in loss and damage, according to the Inter-American Development Bank (IDB).

The damage amounted to the value of one-quarter of the Bahamian GDP, or the equivalent of the United States losing the economic output of Florida, California and Texas.

Over the past few years, several other Caribbean countries, including Haiti, Dominica, the British Virgin Islands, and Antigua and Barbuda, have suffered loss and damage of a similar magnitude as a result of tropical cyclones or other weather events.

At the same time, other parts of the region battle with the impact of recurring and sustained droughts and other extreme weather events blamed on climate change.

“For decades, we have said in Barbados, that in spite our high level of development, if a hurricane hits us tomorrow, we will move from dealing with qualitative issues in education to access to basic school places because of the destruction that it will wrought on our society,” Mottley told the ACP summit.

“It is against this background therefore that I ask us to recognise that we cannot continue the process of development as contemplated in the post-Independence era, with the vulnerability that we have in a climate crisis world, without appreciating that there needs to be special mechanisms for financing resilience and adaptation.

“And finally, I ask us equally to recognize that as a grouping, the ACP ought to be the community that brings a human face to handle the fractious issue of migration in today’s world. We have allowed the movement of capital, but we seem not to like each other enough to allow the movement of people.”

The Barbados prime minister said this requires are human and humane approach, adding “and I ask that we consider as we go forward, … that it is critical that we can be that defining difference in history to agree to a compact that establishes a social floor below which none of our citizens should fall.”

She said that in doing so, “the xenophobic and racist aspects of migration will evaporate, because we will begin to see people as people adding value rather than people sucking and draining from the whole.”

She said there is a moral obligation that the citizens of ACP nations are best place to bring to the rest of the world because of their own history and experiences.

“So, my friends, the choice is clear: Will the ACP be a fast track to our future or will it be a relic of the past? I suggest to you that we the states of the Caribbean region, CARIFORUM, believe that we have a moral duty to make the ACP the fast track to our future and to bring to global discussions a level of humanity and realism that is required by our citizens in this 21st Century.”

The impact of climate change on ACP nations was a recurring topic at the opening ceremony and Mottley said that almost all ACP countries are reeling under the impact and effect of the climate crisis.

The meeting is taking place in a country where scores have been killed and some 160,000 people displaced by floods, triggered by unseasonably heavy rains blamed on climate change.

Mottley said that if North-South relations are to have meaning in the 21st century, “they must be partly defined by justice of the moment and by the recognition that the Warsaw Development Mechanism for Loss and Damage cannot simply be a footnote in the documents of the conferences to settle climate change arrangements. It has to be real.”

The mechanism, created in 2013, acknowledges that “loss and damage associated with the adverse effects of climate change includes, and in some cases involves more than, that which can be reduced by adaptation.

“We in the region know that we are not the ones who started this but we are on the front lines of the battle and are receiving the damaging consequences of it,” Mottley said, adding that the notion of climate refugees is now regrettably part and parcel of the lexicon throughout ACP countries.

“It’s here, it’s now, it’s not forecast, it’s not predicted. Lives are being lost, livelihoods are being destroyed — Dominica, Barbuda and in recent times the Commonwealth of the Bahamas in the Caribbean.”

Mottley warned that without action, government finances are being stressed to breaking points.

“Equally, the cost of insurance has become prohibitive for households and businesses in our part of the world, and we ask: Where shall our economies go, given that most security and contracts require the procurement of insurance on the part of businesses if they are to participate fully in a global integrated economy?

“These are the real issues our people are facing on a daily basis, and we would do well to confront them and to advocate their resolution as a matter of urgency,” Mottley said.